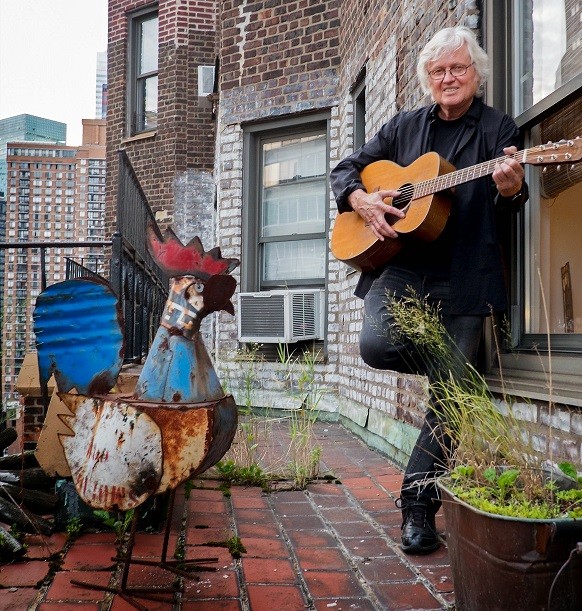 On June 9, in New York City, the Songwriters Hall of Fame had their annual ceremony. Composers inducted in the class of 2016 included Tom Petty, Marvin Gaye [1939-1984], Elvis Costello and James Wesley Voight, known as Chip Taylor, 76, an outlaw country singer who, like Willie Nelson, rejected Nashville's strict 1970s conformity. Unlike Willie, though, who packed up and moved to Austin, Taylor packed up and quit the music business entirely in 1980 to become a professional gambler. The brother of actor Jon Voight and volcanologist Barry Voight certainly wasn't going to listen to anybody tell him how to make his music.

Sixteen years later in 1996, much richer, Taylor returned to music as something of an elder statesman. After all, this was the guy who, as a 20something, wrote the iconic "Wild Thing" (The Troggs, 1966). Jimi Hendrix used the song to set his guitar on fire at the 1967 Monterey Pop festival. He wrote "Angel of the Morning" (Merrilee Rush, 1975) and "Try (Just A Little Bit Harder)" (Janis Joplin, 1969). Other songs of his have been recorded by Frank Sinatra, Waylon Jennings, Johnny Cash, Aretha Franklin, Dusty Springfield and, yeah, Willie.

Little Brothers (Train Wreck Records) came out earlier this year with a picture of him and his two brothers as children. He co-produced it, wrote it, plays acoustic guitar and sings some harmony with himself. It's a casual session filled with folksy wisdom and he even tells a few stories (something you never hear on a CD by singer/songwriters who usually let their music do the talking). No, ol' Chip is folksy enough to tell a few tales in that appealing drawl of his. It's like sitting in his living room.

Some of the tracks are pure confessionals. Most profound is "Bobby, I Screwed Up" about a rough recording session he had one time with his friend and fellow songwriter Bobby Scott [1937-1990] who wrote "A Taste Of Honey" and "He Ain't Heavy He's My Brother." His "Enlighten Yourself" is good solid advice, but I could have done without the honking of a car horn every time he curses. I prefer the uncensored reprise that closes the CD.

Mere weeks later another CD arrived by Chip Taylor with even more inspirational messages. "I'll Carry For You" is an odd but infinitely satisfying EP with five poignant, hard lessons learned. Then three of the same songs done as instrumentals that serve to drive home his gorgeous melodic constructions. It works. The five songs-"I'll Carry For You," "She Had No Time To Get Ready, She Just Was," "Let Me Fall My Own Way," "St. Marguerite" and "Live To Strike Again"-are all anthemic. They could be torch-bearers for a generation who feels itself left out of the mainstream. But which generation? His? Mine? His grandchildren? And that's another thing about this EP. His grandchildren-Riley, Kate and Sammy Ennis-sing some beautiful back-up in a totally endearing way, a counterpoint to his gruff exterior. Much like Leonard Cohen uses female voices to offset his non-singer vocals, Taylor's use of his own grandkids is a master stroke.

The cover of "I'll Carry For You" is a shot of the brave Henderson sisters, Brittany and Brooke, who, as Taylor writes in his homespun liner notes, "love each other, root for each other and caddy for each other whenever possible." Elmer Voight, Taylor's dad, was a pro golfer, as was Taylor himself before music became his calling. Taylor wrote these five songs with the Hendersons in mind as they both tried in vain to join the LPGA. Now, Brooke Henderson is ranked as the #5 female golfer in the world. Brittany is "on the bag," as they say around the links, caddying for her sister.

Taylor leaves us with a dedication. Written within the packaging for the EP, he says, "this album is for all who strive to achieve and face the emotional difficulties of either failing to reach those goals...or achieving them. With special love and thanks to the grandkids, my granddaughters, who lent their spirit and lovely voices to these songs..."

Chip Taylor and singer/songwriter Carrie Rodriguez will hit the Canadian road together in September at Sherwood Park in Edmonton (14), Elks Lodge in Red Deer (15), River Park Church in Calgary (16), Braeside Community Centre in Calgary (17) and Geomatic Attic in Lethbridge (18).

Willie Nelson to Receive Library of Congress Prize on PBS