The brass at Carnegie Hall have announced that Michael Tilson Thomas will step up to the podium for Yannick Nézet-Séguin, leading the Philadelphia Orchestra at Stern Auditorium/Perelman Stage this Friday, December 6 at 7:30 p.m.

Be it a concert that reframes musical war horses or one that gives music, herself, a frame (during the middle of a labor dispute, no less), the American Symphony Orchestra is certainly one of the more daring ensembles you'll hear play Carnegie Hall. Under the baton and brain of Leon Botstein, the ASO takes its founder Leopold Stokowski's avowed intention--namely, "that orchestral music shall remain accessible and affordable for everyone"--and gives it a new charge: Orchestral music should also edify the public at large. But as Botstein duly notes in this exclusive discussion with Classicalite editor-in-chief Logan K. Young, in the sound world of late Pulitzer Prize-winning composer Elliott Carter, intellectual heft never does betray the "immensely musical." 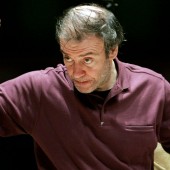 The crowds demanded a statement from Maestro Gergiev. Now, they have one.

The Chicago Symphony Orchestra Association (CSOA) recently announced its third consecutive year of record-breaking fundraising, with ticket sales at an all-time high for the 2013 fiscal year.

Hours before Carnegie Hall's opening night gala was scheduled to begin, Carnegie Hall stagehands went on strike--forcing the venue's management to cancel the event. The centerpiece of the evening was to have been a Philadelphia Orchestra concert led by Yannick Nézet-Séguin.