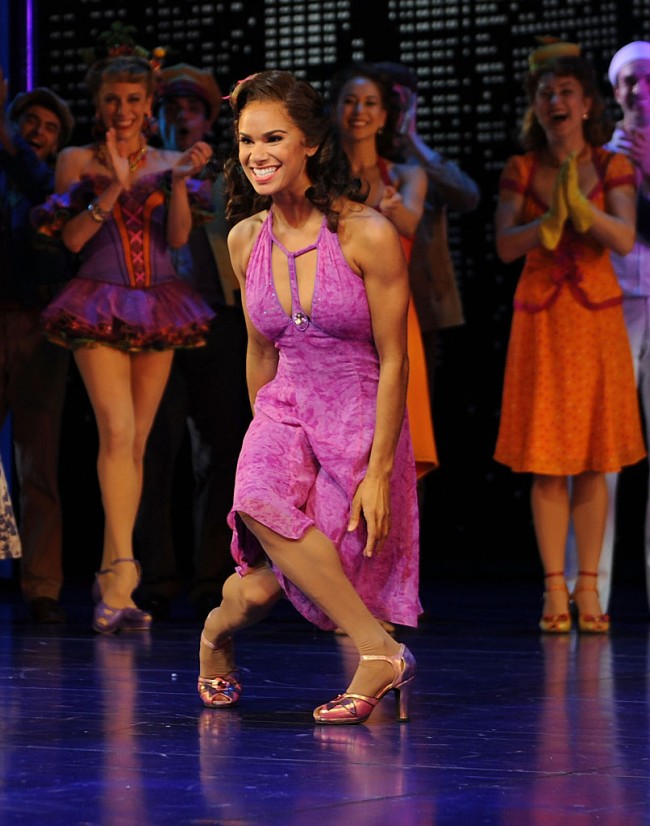 Misty Copeland onstage during her debut performance in Broadway's 'On The Town' at the Lyric Theatre on August 25, 2015 in New York City. (Photo : Getty/Brad Barket)

Misty Copeland made headlines earlier in the summer by being named the first African-American prima ballerina at the American Ballet Theater. Now, she's commanding some of the highest prices on Broadway. Ever since the announcement that Copeland would take over for New York City Ballet principal dancer Megan Fairchild in On the Town, ticket prices on the secondary market have continually been on the rise.

Prior to Copeland's appearance, the average cost for a single On the Town ticket on the secondary market was $140. Currently, that tally is up to $170, a 21.4% increase--the highest percentage gain that box office has seen since since May.

Of course, this increase could also be attributed to the fact Copeland's run is done Sunday, September 6.

As is On the Town, itself.

The Under Armour brand ambassador made her Broadway debut on Tuesday night, willing a want of $185.02 via the secondary. And for the remainder of her stint, the most expensive On the Town tickets on TiqIQ list for this coming weekend, with an average price of $193.50 (and a get-in steal of a deal at $115).

Sometimes, it's the show that sells the tickets; more often than not, it is the star who really breaks the bank. Apropos, Copeland's first performance garnered glowing reviews, and with only two weeks left to catch her as Ivy Smith (a.k.a. Miss Turnstiles), fans will no doubt flock en masse to West 42nd's Lyric Theater.

The revival of Bernstein/Comden/Green's 1944 On the Town was nominated for four Tony Awards this year.

Alas, it did not win a single category.

Come September 6, On the Town goes dark, and Misty Copeland will return to her historic role with ABT. Rumors have it that will make room for a brand new Cirque Du Soleil show to open next spring.

Across the country, Cirque du Soleil secondary tickets have an average asking price of $178.99, though it's possible there could be a premium for any production that actually makes it to the Great White Way.

Misty Copeland Joins Cast of 'On the Town' in Broadway Debut