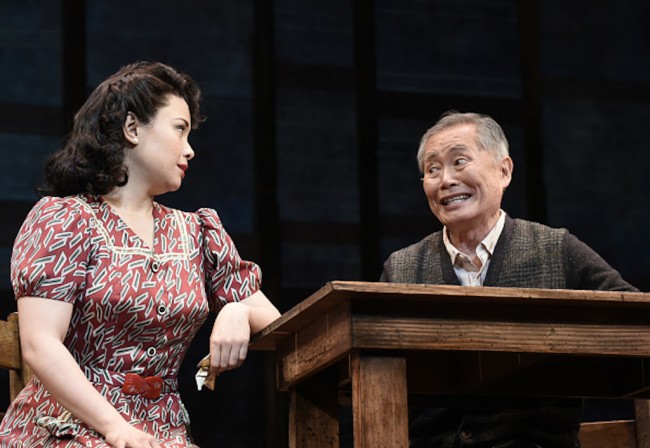 It seems that Hamilton creator Lin-Manuel Miranda would rather see a Broadway show than his own 60 Minutes segment. The playwright was catching George Takei in the musical Allegiance while his piece aired -- sitting among Taye Diggs, Lance Bass and more.  He found the play so moving he tweeted his praise to George Takei about the performance.

Just saw @allegiancebway. Sobbing. There is nothing like the power of an insanely talented company telling their story. Bravo @GeorgeTakei!

A Star Trek superstar, Takei's musical is about the internment of Japanese-Americans in World War II. Created by Jay Kuo, Marc Acito and Lorenzo Thione, the story pulls from Takei's own experiences as an interned Japanese-American during WWII.

When he was only 5 years old, Takei and around 120,000 Japanese-Americans were removed from their homes and forced into internment camps following the attack on Pearl Harbor.

While the story is just that -- a story -- it is filtered through Takei's connection with its premise, and it doesn't hurt that the aging Takei is typecast as the grandfather.

As the A.V. Club points out, the setting in Allegiance is one that's not often told through the lens of Japanese-Americans. Even the time period -- 1940s America -- seems to be a strange environment for an all-Asian cast, which caters to the idea that this is an idea infrequently presented on Broadway.

The article further points to another notion: "It's a familiar battle between respectability politics and protest, but Allegiance doesn't neatly present those two ideologies. Instead, just about every character has a different perspective on how to deal with internment. At the heart of the debate is a loyalty questionnaire that asks detainees whether they will renounce allegiance to the emperor of Japan, declare loyalty to the U.S., and serve in combat if ordered. The indignity of being questioned about their patriotism after being stripped of their civil rights becomes a sticking point for many in the camp."

So if you have any cash left attending Hamilton be sure to swing by Allegiance happening just a few streets down. Both spin a historical yarn in a unique way that is certainly worth the price of admission.

Take a moment to watch the trailer for Allegiance if you still need convincing.