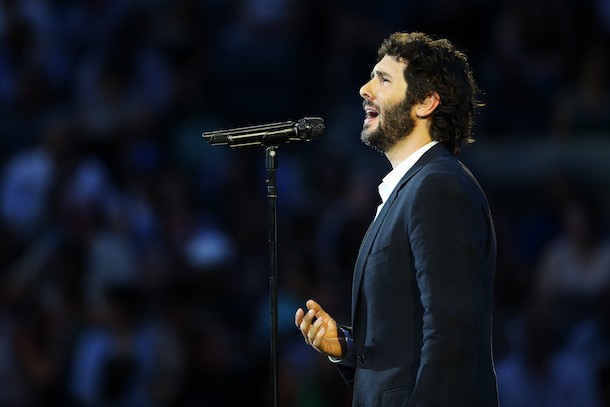 Singer Josh Groban performs during the opening ceremony on Day One of the 2015 US Open at the USTA Billie Jean King National Tennis Center on August 31, 2015 in the Flushing neighborhood of the Queens borough of New York City. (Photo : Matthew Stockman/Getty Images)

The “Public Domain Song Concert Palooza” is not the next Bonaroo. Instead, it’s a soon-to-be fixture on the Late Late Show With James Corden where Corden and Josh Groban sing songs deemed public domain. The set list includes “Ba Ba Black Sheep,” “Frère Jacques” and more.

With songs floating in the public domain, Groban and Corden won’t ring up a massive bill for CBS in royalties (except when Josh sings a snippet of a Neil Young song, which is quickly silenced by Corden).

It’s an experience, to say the least, as Mr. Groban is able to sing some of these timeless tunes with operatic excellence. Even when he cantos, “This old man comes rolling home” it is enough to tug at your heartstrings.

For Groban, these songs now take on a particular resonance and even when the singer opens his mouth for the first few lines, it’s clear that these are not your average nursery rhymes anymore.

As it’s been reported, when Groban expressed discontent for CBS seemingly having no budget to spend on songs not in the public domain, Corden explained that all of the network's proceeds, instead, go to Jim Parsons a.k.a Sheldon from The Big Bang Theory.

This is good timing for the opera singer who plans to embark on a North American tour in summer 2016. The tour, designated as the On Stage Tour, will feature multiple Grammy Award-winner and animal rescue advocate Sarah McLachlan on select dates across the continent.

While Groban will sing songs from his most recent album Stages, which features some of the singer’s favorite songs from Les Misérables, Carousel, Sunday in the Park with George, Sweeney Todd, Into the Woods, The Fantasticks, A Chorus Line, Phantom of the Opera and more.

Tickets for the concert are already on sale via Live Nation.