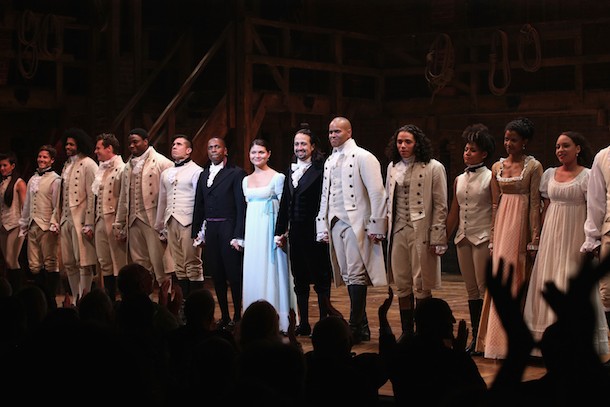 In an effort to keep fans of Hamilton happy and reduce the number standing in line during very cold temperatures, the show's creator, Lin-Manuel Miranda, created an online lottery. Hoping to bring the coveted "$10 golden ticket" to theatergoers in their homes, the website hosting the lottery crashed immediately and sent patrons back out to the streets on Wednesday.

Hamilton is a hit on Broadway and audiences have been chomping at the bit to get inside Richard Rodgers Theatre to witness the phenomenon. Mr. Miranda, noting the excitement, has made all efforts to provide for his fans, even giving tickets to local schools and announcing a lottery every Wednesday for lower priced tickets.

The anticipation has built so much over the production that the theater on West 46th Street has been subject to overcrowding. When the online lottery debuted earlier this week, the number of fans who logged on in with hopes on landing a golden ticket had their dreams dashed by the high volume or traffic crashing the site.

#Ham4Ham is the tag used to discuss the lottery on Twitter, where there has been an outpouring of disappointment resulting from a massive e-mail glitch that sent out "you've won" messages to more patrons than seats.

Having been compared to ObamaCare, this is probably the first oversight in the long measure of success for the musical, which combines hip-hop and other stylings to tell the story of the nation's underdog founding father, Alexander Hamilton.

It won't hurt the play's success, of course, but it certainly was a disappointment from Broadway Direct to fans around the area.

To keep it fair, Miranda scrapped the tickets so that, at the very least, no one got any advantage. Mr. Hamilton would be proud, sir.

Try again next week but in the meantime, if you don't understand what Lin-Manuel Miranda is trying to do with the lottery, get a preview of it below.