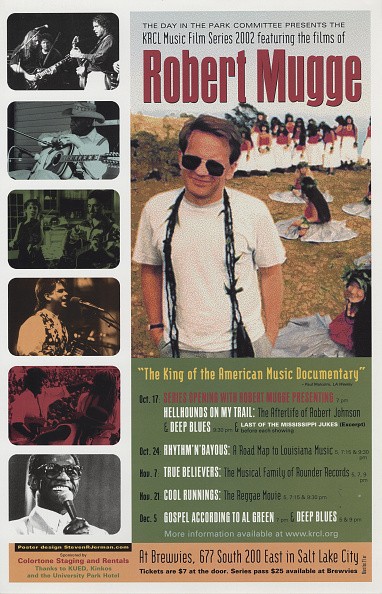 Classicalite - Where does the line diverge between documentarian and feature filmmaker?

Robert Mugge - Oh, that is a tough question. You could write multiple books on that subject alone. First and foremost, all filmmakers are storytellers. I teach a course on storytelling, everything from the silent era to today. I emphasize where the story is being told visually and, for the most part, that is where they diverge.

In documentary film-making, I believe there should be a an implicit contract between the filmmaker and his audience saying, "I won't screw with you." Documentary films and fiction ones share many of the same storytelling notions adopted from the theater- ie. irony, metaphor, and the rhythm of language. The difference is, in fiction, you have to stage the scenes, put words into the mouths of the people and try to contrive a reality that a good documentary subject will have already built into it.

Classicalite -  In a sense though, both have stepped on each other's turf, though. Take for example, Woody Allen's Take the Money and Run and Zelig.

Robert Mugge - Right, there have been made some wonderful pseudo-documentaries where filmmakers, like Woody Allen, have merged the two together. There are documentaries that make use of "re-creations" of events to underline the story being told. It's all part of the process of storytelling. There are inherent ethics you must subscribe to in everyone if you want or hope to be successful.

For me, personally, I make non-fiction films, usually.music or culturally related. I won't put dialogue in people's mouths because I want their language, their intonations, how they speak to be heard. The balance is to keep it as authentic as possible but being cognizant that this is also an entertainment business as well. I have learned a lot. Not only am I a filmmaker but, through my work, I have learned how to work with musicians, edit and insert performances into films.

Classicalite - Structure a film, so to speak?

Classicalite - Talk a little about your influences as a filmmaker? Was DA Pennebaker an influence on you?

Robert Mugge - Somewhat but I have never shot in the cinema-verite style like he did on his 1965 Dylan documentary Don't Look Back. For me, starting out, I was influenced, of course, by the French New Wave, Jean-Luc Godard and the like, the New German movement, Marcel Ophuls' The Sorrow and the Pity. Ken Russell was another big one. I know most people felt he went off the tracks when he started making features but, when he started out at the BBC, way back when, he made documentaries about musicians and artists such as Dante Gabriel Rossetti. As well, I took a course in film theory taught by Slavko Vorkapich that had a profound effect on me and helped me shape my approach.

We choose our paths and mine has been this. I have found myself committing to documenting, preserving and promoting important musicians who for whatever reason have been overlooked by the media and record companies. This has been a key part of my filmmaking ever since.

Classicalite - Throughout your career, you've largely worked as an independent filmmaker. What are the plusses and minuses of going that route?

Robert Mugge - The most obvious one is there is never enough money. However, one of the things you try to do as an independent filmmaker is try to find people who have an interest in the subject and maybe need programming. I have worked for TV companies like Starz and other networks. I've kind of stayed in between but always tried to maintain copyright of my films or have the ability to get it back.

I've gotten financing from state governments. I made a film about Hawaiian music that the state of Hawaii financed. The state of Louisiana helped finance the films I did on zydeco. I knew, coming out of college, I would have to pioneer my own ways of getting films funded and distributed those who are the quickest to adopt to changes and industry advances.

One thing that has affected music documentaries is more and more directors are abusing Fair Use in their films. They are taking advantage of artists, both musical and film, by either claiming them in an educational context or using short snippets so they won't have to pay the artist. I make sure that I use the full song of the artists.

Classicalite - What goes into choosing a subject?

Classicalite - For your film on Hurricane Katrina, New Orleans: Music In Exile you were down there a full two months before Spike Lee?

Robert Mugge - Yes, I made that in conjunction with the Starz Network. I was living in Jackson, Mississippi. I felt it was a significant cultural and historical event. I was down there less than two months after it happened and I was in the middle of the devastation. I had music friends who lived in New Orleans so it was a dual working and checking on them.

Classicalite - How did you feel about Spike Lee's conspiracy theories?

Robert Mugge - He was painting with a broad brush, making public pronouncements that there was a conspiracy against black people and the rebuilding efforts. I wanted to make a more personal and coherent view, as told through the eyes of the musicians who were displaced. It was funny because HBO allowed Lee to do a four hour film. Starz told me that no one would want to sit through a four hour film on Katrina.

Classicalite - How were you going to handle that?

Robert Mugge - Well, I thought it would be great to have the first two hours focus on the condition in New Orleans. The next two hours were going to be about the outside world's perception of the events.

Classicalite - What was it like going into the Mississippi Delta and meeting legends like RL Burnside, Junior Kimbrough and others?

Robert Mugge - When I went in '90, they had rarely ever, left Mississippi and had no recordings of any sort. These massively talented individuals were in danger of largely passing through this life unnoticed. Fat Possum Records didn't happen til '91. The film, Deep Blues, was produced with money from Dave Stewart of Eurythmics. He was deeply admiring of the blues culture and wanted to give back.

Classicalite - Was it difficult getting RL and them to trust you?

Robert Mugge - This past August, I did a presentation where I talked about what a filmmaker needs to do to go into area very much removed from his or her background. I laid out the things you need to do to get accepted in that type close knit community. You find a person who is respected and show them your work and get to know them, convince them of your good intentions and your ability as a filmmaker and that person introduces you around, takes you to meet people, see things. It is always very important to show how respectful of the artist and their work, what your intentions are. After a while, you begin develop a reputation. It was wonderful. I made these films because I love this music and these people. You want to help them get recognized. It would have been a shame if their music had somehow been lost.

Classicalite - Do those methods about gaining trust work with bigger artists like Gil Scott-Heron and Sun Ra?

Robert Mugge - Somewhat similar. I should start with Sun Ra. I first heard him at the 1972 Ann Arbor Blues and Jazz Festival. A year later, I moved to Philly to go to grad school and tried to figure out how to raise enough money to do a film on Sun Ra. went to some performances. I found out where he lived and got to know some of the Arckhestra. I took what money I had from the film I did on former Philadelphia Frank Rizzo to buy film stock and did what I could to convince my film friends to help me free of charge. I developed a great repour with Sun Ra. It may seem strange but the life of an independent filmmaker and that of a independent musician are quite similar.

Robert Mugge - I was in London to see when this crazy Scotsman named Andy Clarke bought Channel 4 in England and I went to see him because I had nothing going on. He put on the latest Gil Scott-Heron single "B-Movie" off his latest album Reflections and said, "If anyone made a film about this guy, I would fully finance it. No one had ever said that to me before.

It took me a couple months to reach out to Gil. I finally did and he agreed to do what would become Black Wax. We got along really well.

Classicalite - Of all the subjects you've tackled, who surprised you the most?

Robert Mugge - The film I am most proud of is Gospel According to Al Green. I have always had a fascination about the connection between the blues and popular music, devil music, and gospel, secular music. This played out to the extreme in Al Green. In the early 1970's only Elvis and the Beatles sold more than Al did. This began to play on Al. After a concert, Al and his girlfriend went home. Al took a shower and his girlfriend Mary White went to the kitchen to fix a pan of grits. She went upstairs, hurled the hot grits on Al and went down stairs and killed herself. Needless to say, Al was devastated. When I made the film, he was still very much at the top of his game. I was able to elicit some very powerful performances.

A nice man and an awesome experience.