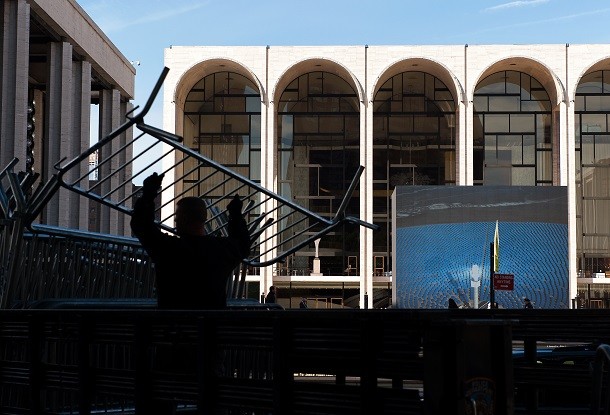 New York City Police Department set up barricades outside the Metropolitan Opera at Lincoln Center in anticipation of protests of the opera, 'The Death of Klinghoffer' on October 20, 2014 in New York, NY. (Photo : Bryan Thomas/Getty Images)

In a report issued by Moody's, the Met's credit rating took a downturn in 2014 after the company reported a $22 million deficit and entered into a strike with some of its union members. Its credit rating has remained steady since 2014 but, at least, the Met has been able to accept wage concessions from its unions with a rise on contributions to boot.

Despite that news, general manager Peter Gelb is optimistic about the future of the Met and its attendance record. Gelb also said in the report that the success of the Met in the coming years will be positive and help get the orchestra back on track prior to 2014.

Last year, the Met Opera had a $308 million budget with about $148 million in donations alone. Since then, the Met has been on a crusade to cut costs in every sector as well as double the size of its endowment. Perhaps, Mr. Gelb, this is easier said than done.

Moody's states that the Opera still faces liquidity problems as well as difficulty in keeping its attendance at high and steady levels. Like most organizations across the country, the decrease in concert-going is steadily on the decline.

Hopefully, the orchestra will resume its normal line of credit in the coming seasons. For now, though, keep yourself familiar with the company's virtuosity in a video below.