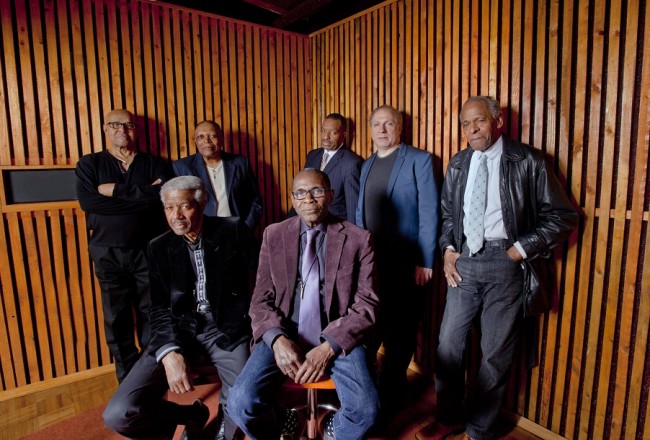 The concept of a "super-group" in this day and age might be overplayed so let us just say that the fifth CD by The Cookers, The Call of the Wild and Peaceful Heart (Smoke Sessions Records) by The Cookers is one of the top jazz CDs of 2016. How could it not be with this lineup?

You can thank trumpeter David Weiss (no slouch himself) for bringing together this collection of living legends. Time and space will not permit this critic to fully expound on their collective experience but tenor saxophonist Billy Harper was in the bands of Lee Morgan and Max Roach; trumpeter Eddie Henderson and drummer Billy Hart were part of Herbie Hancock's crew for his 1971 Mwandishi masterpiece; George Cables played piano in the bands of Dexter Gordon and Art Pepper; bassist Cecil McBee anchored the bands of Charles Lloyd, Pharoah Saunders, Miles Davis and Wayne Shorter. Now add New Orleans alto saxophonist Donald Harrison, formerly of Art Blakey & The Jazz Messengers (as were they all), and you have a fine kettle of soup in which to dip and dunk.

Harper's frenetic 1975 title track starts it off with solos by Weiss and Cables. Cables originally wrote the jaunty "Beyond Forever" in 1977 for Henderson's Comin' Through. McBee wrote the mysterious "Third Phase" for this project (the only debut track) while Hart wrote the complexly circuitous "Teule's Redemption" for his 2014 One Is The Other.

Call it post-bop if you want but this project is in no way trying to soften-and thus broaden appeal across-the-board-its hard-bop credentials. That's to its credit as these seven men get to get down and do what they do best. There's nothing like a four-horn front line! Nobody does it better so, as the saying goes, if you only buy one jazz CD this year...

When 'A Master Speaks,' We Listen! George Coleman Finally Records After 19 Years! [REVIEW]