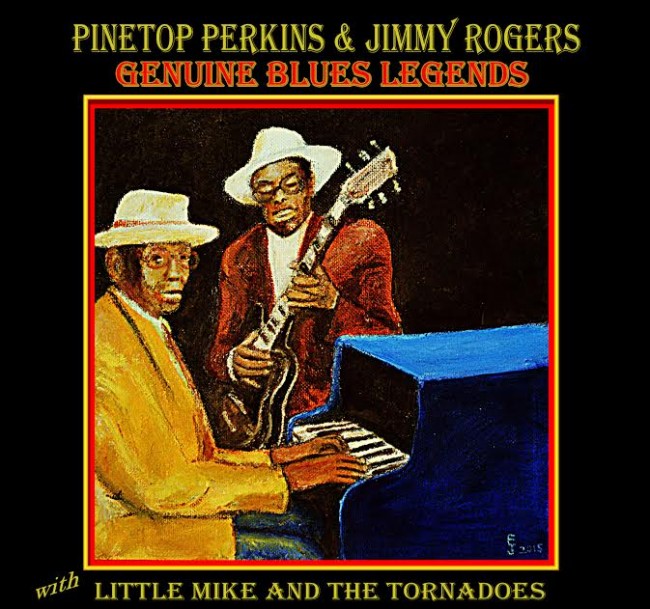 Legends collide on this rare one night stand recorded live at The Grand Auditorium in Ellsworth, Maine on May 21, 1988. Genuine Blues Legends (ELROB Records) Pinetop Perkins and Jimmy Rogers command the stage backed up by Little Mike and the Tornadoes, a fiery outfit led by harmonica-blowing Mike Markowitz.

The sound quality isn't all that we're used to in this day and age but it's sure good enough, despite muddy vocals, to groove behind the typical Pinetop pianistics and that ever-lovin' Jimmy Rogers guitar. And yes, both legends sing. Material on this 10-track, hour-plus recording runs from Eddie "Cleanhead" Vinson's 1969 "Kidney Stew" opener and Tommy Tucker's 1963 "High Heel Sneakers" on through Jimmy Reed's 1960 "Big Boss Man" and three Pinetop originals.

The playing is exemplary. Mike blows loud and hard while his well-seasoned band keeps up every inch of the way. The two legends are in fine spirits both vocally and instrumentally: Rogers spewing out great chunks of lightning leads while the fingers of Perkins do the walking all over his piano from stride to boogie to the kind of slow scintillating blues that should send a shiver down your spine.

Perkins was born on a Mississippi plantation in 1913. He won a Grammy Award in 2011 at the age of 97, just weeks before his death. Growing to regional fame in the 1940s performing for years on Arkansas radio's King Biscuit Flower Hour, he hit the open road with fellow legends Robert Nighthawk and Earl Hooker. After a stint as a St. Louis mechanic, he finally made it to Chicago to become a star during the 1960s folk and blues resurgence as the piano player for Muddy Waters.

Rogers [1924-1997] was also from Mississippi but by 1947, was already in Chicago, playing with Muddy and recording for Chess Records throughout the 1950s. Since hits were far and few between, he left music to open a clothing store, which burned to the ground during the 1968 Chicago race riots. Forced to re-enter the music scene in the 1970s, he didn't get to enjoy serious success until the 1980s as part of The Legendary Blues Band, consisting of former Muddy sidemen.

Little Mike and the Tornadoes have been around since 1978 backing up all kinds of blues stars while putting out rough and tumble rocking little records of jump-blues, boogie-woogie and funky soul. Here, they're the perfect foil for these two legends.

BLOGARRHEA: Blues Bonanza Wrap-Up of the Newest and the Bluesiest