Laurie Anderson Holds a Concert for Dogs in Times Square 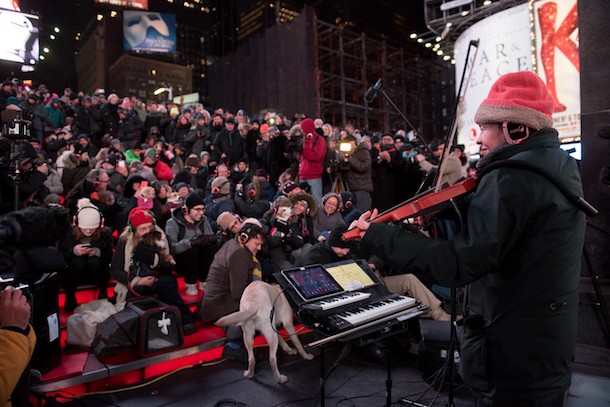 Dog owners will go to great lengths for their canines, sure, but how about attending a concert in the blistering cold designed strictly for their ears? Performance artist Laurie Anderson recently held a concert in Times Square specifically for dogs; at a volume and pitch perfect for their tender ears.

Ms. Anderson was accommodating to her animal audience, performing at a frequency low enough so as to not perturb the dogs but also providing headphones for their human owners.

The show, which was held Monday, was met with seemingly positive reception. But as one would imagine, it's hard to feel the room when most of your patrons don't speak English, or any human language.

Ms. Anderson took the stage just before midnight and performed with her tape-bow violin, an invention of hers from the '70s. The performance was mostly in accordance with Anderson's Oscar-nominated and first feature-length film Heart of a Dog. A three-minute adaptation is showing also, on a billboard in Times Square throughout January.

According to The Independent:

"The dream-like film celebrates 'dogs, time, family, love, memory and death' and was inspired by Anderson's own rat terrier, which she adopted with late husband Lou Reed."

Per the video below, when audience members were surveyed on why they attended or what their canines were exposed to musically, it appeared that owners' music interests correlated with concert--meaning they fell in the classical and jazz categories.

Though the music may have barely been audible to humans, the concert turned out to be a success. Will we see more of the canine counterculture attending concerts in the future? Who knows?

But for now, watch the clip from the concert below and see what you make of it.