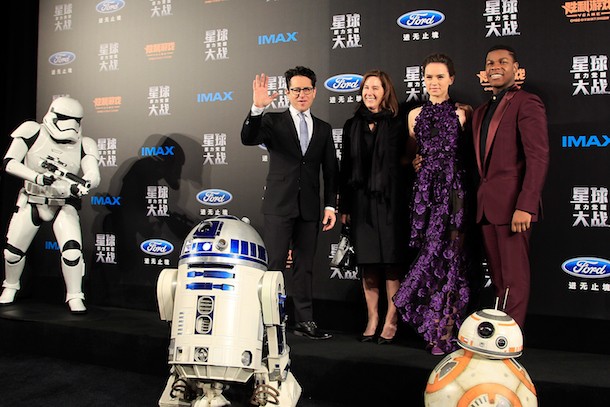 Star Wars: The Force Awakens has gone beyond the one billion dollar mark faster than any other film in history. The film shows no signs of slowing down at the box office, but has had a hard time finding traction in China. Nonetheless, it's safe to say that opening during the holiday has helped the film rack up $652 million dollars in the United States market.

Senior media Analyst for Rentrak, Paul Dergarabedian states, "This would have been a respectable opening weekend for 'Star Wars' It's become a happening. It's a cultural event that's seeped into the zeitgeist. That's the only way you get these numbers domestically."

In just 12 days after its release, Star Wars: The Force Awakens amassed a whopping $544.6 million domestically, but is now at 1.7 Billion world wide and counting.

As of this moment in America, Star Wars has earned $816 million to date. The dinosaur film Jurassic World previously held the domestic record that is now held by Star Wars.

Another major record the film has broken lies in the three-day holiday weekend. The Force Awakens will go down in the history books ranking as the biggest Christmas weekend opening ever, beating out the previous record holder Sherlock Holmes (2009). As time continues, too, it is more than likely to surpass both of James Cameron's box office giants, Avatar and Titantic, to become the highest grossing film in history.

Industry leader Rentrak, which conducts real-time exit polls via PostTrak, and tracks movie audiences and trends, confirms these high dollar amounts are all thanks to repeated viewings by nostalgic fans and a rising number of young girls and women. In terms of numbers, the female audience makes up 38% 'Star Wars' film viewers.

This surge in numbers among women can be attributed to the strong female presence in the film. According to Disney Distribution President Dave Hollis, "We can't do these kind of numbers without extraordinary repeat business. We know anecdotally people are seeing it three and four times. Everyone wants to be part of something that has become a cultural phenomenon."

The final test for Star Wars will be how well it does in China. Apparently the film hasn't done as well as it has in the states despite critics and experts predicting that it would. Perhaps it is because the Star Wars franchise isn't very well known in the country that it possibly wouldn't do well financially.

According to Forbes, from opening day, which was January 9, the film has only averaged a four day total of $66 million. If things continue to go this route, it may only make $150 million during its theatrical run. Unfortunately, that is not enough to top James Cameron film Avatar. Thank goodness the film does not really have to rely on the Chinese market.