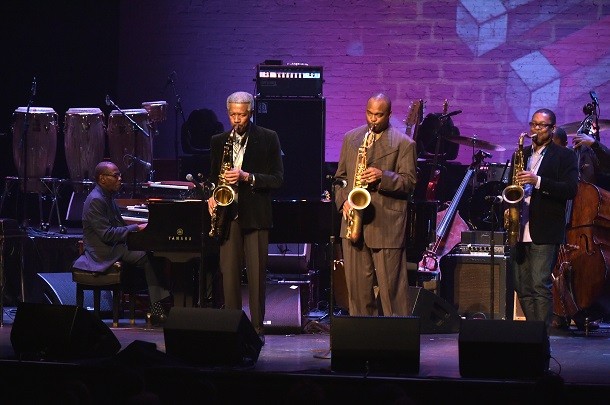 Saxophonist Pharoah Sanders has been added to the PDX Jazz Festival program, an annual gala held in Portland. Sanders will use his time to help pay tribute to Mr. John Coltrane at the festival, which will be held from Feb. 18-28 in the booming Oregon city.

Per a release, Sanders will perform in a star-studded ensemble including saxophonist Ravi Coltrane, pianist Geri Allen, drummer Andrew Cyrille, bassist Reggie Workman and harpist Brandee Younger and will premiere to the world the first performance of "Universal Conscioussness."

The debut of the composition and the group is set for Feb. 27 at the Newmark Theatre.

If you aren't in the know, Sanders has continued a nearly six-decade long career that has included performances with pianist McCoy Tyner and the late multi-instrumentalist Ornette Coleman. He has also appeared alongside blues and rock icons such as Santana, John Lee Hooker and Bill Laswell.

A Grammy-winner, too, he was recently selected for the NEA Jazz Master award beside vibraphonist Gary Burton and fellow sax player Archie Shepp. They will be performing at the awards ceremony, too, in Washington D.C. in April.

"Just over a decade ago Ravi lovingly paid tribute to his mom, producing and playing with her on Translinear Light. A number of concerts ensued, which serves as the inspiration for his 2016 festival program titled Universal Consciousness. He'll also pay tribute to his father as guest soloist with the Africa Brass Ensemble under the direction of Charles Gray and featuring the Orrin Evans Trio. He also leads the effort to restore the John Coltrane Home in Dix Hills, Long Island and presides over important reissues of his parent's recordings including the newly restored A Love Supreme; The Complete Masters."

For now, the groups only appearance is at PDX but the night should prove to be an astounding world premiere for Sanders and co.

Check out Pharaoh Sanders below if you haven't in the meantime.