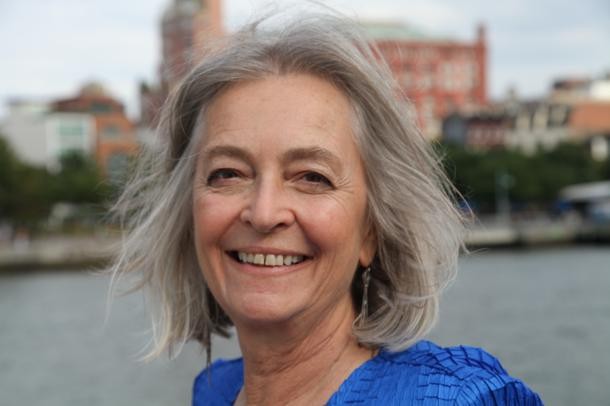 Joan La Barbara, who for over 40 years has been exploring the intellectual aspects of singing, is a must-hear powerhouse of vocal technique. She is drawn to innovative pieces, award-winning composers, and most of all, she relishes in reshaping and broadening our perception of the human voice.

Her performances this year will include three 20-minute micro-operas by John King. One of them, a piece called "A-R-S", is based on a personal maxim of the late composer John Cage (which was originally a quote from Anand Cooaraswamy... who was quoting Thomas Aquinas... who was quoting Aristotle). Another micro-opera, "Ping", is based on a 1966 Samuel Beckett work. And lastly, La Barbara will take part in the world premiere of "What is the Word?" (another Samuel Beckett text, the writer's last work). The piece was commissioned by Avant with a grant from the New York State Council on the Arts.

This week, Classicalite had the opportunity to speak with Joan about some of these works, the role of the Avant Festival, and her career at large.

CLASSICALITE: On February 27th, you'll be rejoining the Avant Music Festival for another scintillating round of long-form vocal exhibition. With a performance career spent largely on the cutting edge of fresh compositional forms (and having also participated in Avant's 2014 program), what do you find most unique about the Avant Music Festival as an outlet for experimentation? What was your favorite aspect of the 2014 event?

Joan La Barbara: In 2014, I premiered "Palimpsest", a work that Alvin Lucier created for me on an intriguing text by Lydia Davis, "If at the Wedding (at the zoo)". Alvin used a technique somewhat similar to what he used for his now-classic work "I am sitting in a room", but using more recent digital technology. I read the text multiple times, over recordings of the readings I had just done, so that layers of the same text were played back as I was reading each new iteration. The rhythmic complexity generated by the layers of identical text, read, on Alvin's instructions, with no regard to aligning with previous readings, was fascinating and exhilarating. I am hoping that we can perform this work again next October when Alvin's 85th birthday is celebrated in Zurich, Switzerland. I find Alvin's work endlessly surprising and absolutely delightful. I always learn so much when I work with him!

CL: Since this year's Avant Music Festival has you appearing in a lineup of John King's "MicroOperas" series (with fellow vocalist Gelsey Bell), can you describe how you and the composer first met and when you began collaborating?

JLB: I'm not sure how John King and I first met. He had studied composition with my husband Morton Subotnick at CalArts. But I may also have met him in connection with the Merce Cunningham Company. In 1984-85, I had received a Fellowship from the NEA Recitalist program, and I asked a number of composers to write new works for me, including John Cage (who composed "Eight Whiskus"), Rhys Chatham and John King (who composed "JoanSongs"). These were premiered on a series I did at Symphony Space and the Alternative Museum along with other works composed for me including Morton Feldman's "Three Voices", Roger Reynolds' "Sketchbook for The Unbearable Lightness of Being" and Morton Subotnick's "Jacob's Room" (with Kronos Quartet).

John and I performed together with the Cunningham company many times over the past several decades. And I am delighted that he decided to write several new works for me including the astonishing "Ping" on text by Samuel Beckett and the new works "What is the Word" (also on Beckett text) and "A-R-S".

CL: King has said that these micro-operas employ "chance, improvisation, live electronics and randomly controlled lighting in an intimate setting." Have you ever before worked in a concert setting that utilized a "scored" visual component? Did rehearsals for these pieces require any coordination between you and the light-work of any kind----or should the word "random" be taken completely to heart?

JLB: I have performed a number of works which involve "randomly controlled lighting" including an incredible realization of John Cage's "Song Books" in Berlin in 2012 with my ensemble Ne(x)tworks and the marvelous singer/composer/actors of Berlin-based Maulwerker ensemble. We used chance operations to control lighting and the effect was striking because the lighting became a palpable scenic element.

John King is setting up his lighting effects separately from our musical rehearsals, so Gelsey Bell and I will experience them at tech and dress rehearsals. It may be similar to the way Cage and Cunningham worked together, establishing time parameters for music and choreography but with no pre-conceived conscious coordination.

CL: In the uniquely immersive experience called "A-R-S", you take part in a marvelous deconstruction of---or perhaps incessant preoccupation with---the text, "ars imitatur naturam in sua operatione" ("art imitates nature in her manner of operation"). Given the span of time in which King has you indulging in, say, one syllable... as a communicator do you find yourself isolating and conveying specific moods in any parts of that text?

JLB: John King has been quite specific that we are to intone the text as isolated sound events, using the pronunciation in fragmentation and choosing any of the indicated pitches. I don't think "moods" are intentional. The charm of the work arises from unexpected events between and among the pre-recorded and live vocalizations.

CL: Set to the text of Samuel Beckett's 1966 modernist short story, John King's micro-opera adaptation of "Ping" is a harrowing experience to say the least. The degenerate structure of the lyrics begs the question: is some degree of mental conditioning in order before you are ready to perform this piece, or do the psychological implications simply roll off your back?

JLB: John King has set specific fragments of "Ping" to specific vocal deliveries: some spoken, some shouted as loudly as possibly, some lyrical, some plaintive, some evocative, some whispered, some inhaled, some growled - all interspersed with striking two metal objects with hard mallets as almost involuntary gestures. I think the "psychological implications" are there for the audience to experience - I am too busy making sure that I do the right thing at the right time! My job is to deliver the properly inflected text and gestures and give that experience to the audience.

CL: Can fans hope to experience a version of "Ping" in the original French at some point… or is that left up to John King?

JLB: Oh that's definitely up to John King; he obtained the rights to set the work and I guess decided on the English. Beckett often wrote in French and translated into English and vice versa.

CL: Speaking briefly to a field for which you're widely recognized, what have you found to be the most rewarding part about extended vocal technique: the performance or the development?

JLB: Both … and all. I have delighted in the initial discovery and have been pleased over the years to guide other singers in using these techniques. I have also tried to transmit some of the vocal gestures to instrumentalists in my compositions. I am now trying to further their use in many forms of vocal compositions, including opera.

CL: Would you have any suggestions to composers who have never before worked with, but would like to work with, extended vocal technique as a compositional tool?

JLB: Listen to my recordings. Listen to recordings of music from around the world. Find what intrigues you. Find a way to translate that into your own compositions. Be true to the music in your mind. Do not imitate; find a way to make these sounds works in your music, make them your own.

CL: Finally, in light of your recent John Cage Award accolade--for which you have Classicalite's sincerest congratulations--do you have any off-the-cuff plans you'd like to share for all that glowing prize money, whether personal or academic?

JLB: Thank you very much! I was surprised and incredibly honored to receive the 2016 John Cage Award from the Foundation for Contemporary Arts. It is, as you may know, by nomination only - one cannot apply for this award, so I was more than delighted. I plan to use the award money to pay musicians and do recordings to help me further my work on an opera inspired by the life and work of American sculptor/visual artist Joseph Cornell and British author Virginia Woolf. It is exhilarating to be able to pay performers and not have to wait to see whether a grant application comes through! I feel honored and blessed!