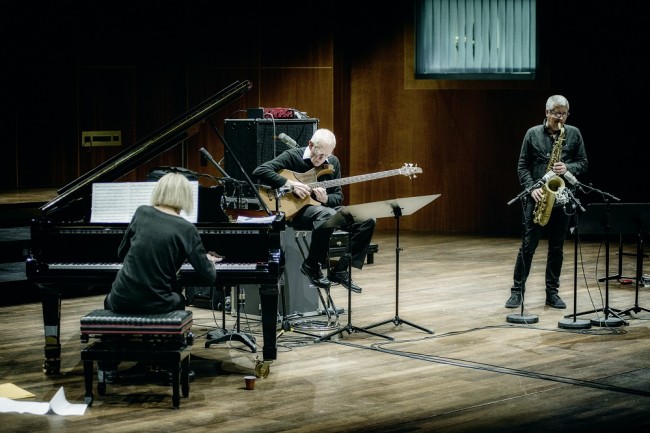 Last year, the National Endowment for the Arts (NEA) proclaimed Carla Bley, 80, a Jazz Master. Since 1982, it's been the highest honor that the United States bestows upon jazz musicians. This year sees the release of her highly-anticipated trio CD, Andando el Tiempo (ECM) with bassist Steve Swallow and saxophonist Andy Sheppard, two leaders in their own right, who have kept this trio functioning for 20 years as Bley's main outlet for her compositions and piano playing.

Their Trios CD was hailed as a masterpiece in 2013. It was the first time that the fiercely independent Bley had worked with a producer, namely Manfred Eicher (the longtime ECM guru/founder/producer/arranger/composer). As someone who had to learn to love Trios, I can honestly say I enjoy Andando el Tiempo more.

The title is a three-track suite representing the three stages of addiction recovery: 1) "Sin Fin" (10:23) is the realization of one's own situation and the powerlessness of being able to do anything about it. It includes the act of surrender and the knowledge one cannot escape alone. The music goes through the anger, resentment, denial and finally the act of letting go, resulting in the most sublime and gentle interaction, especially when one surrenders to the inevitable. 2) "Potacion de Guaya" (9:50) is an astonishingly gorgeous meditation on the effect of such with loved ones. 3) "Camino al Volver" (8:29) is the return to one's true self, unencumbered by chemicals, and written as Bley watched a friend go through that which she was trying to emulate in music.

The 10:06 "Saints Alive!" is a sprightly hunk of joy whose spontaneous chemistry seeps through the mix despite active and complex arrangements proving that even Jazz Masters can adopt, grow and learn from their mates. Sheppard and Swallow push, poke and prod Bley into the kind of creative pianistic genius she has rarely shown. She has much to thank them for.

"Naked Bridges/Diving Brides" (8:42), based on a Paul Haines poem and a Felix Mendelssohn melody, is happy music. Light, airy, always moving, with room for all to shine, it was written in honor of Sheppard's wedding.

One can listen to this for hours and hear new things with each succeeding listen. As the first half of 2016 winds down, we have a "CD of the Year" nominee.