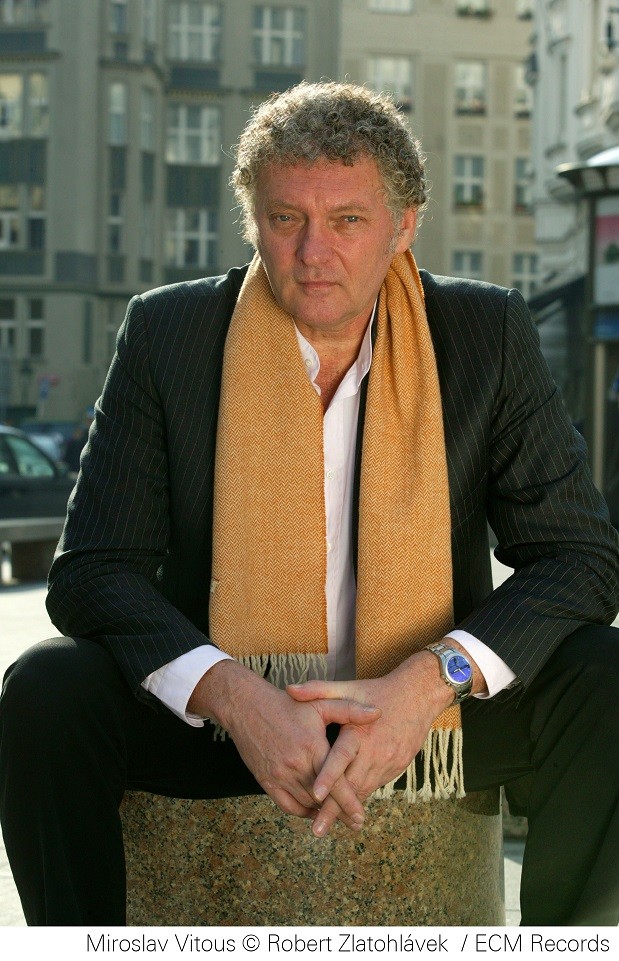 In-between each variation are short haunting existential blues moments. Do not expect them, considering Miroslav's mindset and Weather Report's propensity to break rules, to sound anything like the pioneering template set down by this most courageous of 1970s jazz-rock fusion bands.

Joe Zawinal's "Birdland" has two drummers -- Nasheet Waits and Gerald Cleaver -- acting at cross odds with each other as one plays in 3/4 time and the other in 4/4 or common time. Thus, the combination of two different time signatures, as Vitous says in the liner notes, "creates a kind of tunnel where one can play any phrase in any tempo and it swings amazingly."

Oftentimes, that Vitous bass is in the forefront as a lead instrument right alongside the front line of the twin sax men Gary Campbell and Roberto Bonisolo. Original sax man Wayne Shorter's "Pinocchio," which he wrote when in the band of Miles Davis, used on the classic 1967 Miles album Nefertiti, and reused on Weather Report's 1978 Mr. Gone, is a rather "theatrical" take, according to Vitous, which features a complete overhaul and re-harmonization by Turkish pianist Aydin Esen. It is here where, as he says, "everyone solos and no one solos."

Vitous wrote "Seventh Arrow" and "Morning Lake" for that startling 1971 self-titled debut. The former features a surprising early climax but keeps afloat with Oriental motifs which recall the band's 1972 Japanese trailblazing which, ultimately, led to the release of Live In Tokyo. Here, though, the cloudy atmosphere and skeletal approach to the melodies transform these classic tracks into their own rather nebulous and surreal universe, ephemeral like spirals of cigarette smoke wafting through the air before disappearing entirely.

Born in 1947 Prague, Vitous came to Boston on a Berklee scholarship and immediately made a stateside splash with Miles, Chick Corea, Stan Getz and Herbie Mann. He co-founded Weather Report before being replaced by Alphonso Johnson after two years. His 1990s hiatus saw him developing, marketing and cashing in on symphonic orchestra software. After running his own studio in Northern Italy, he returned to the Czech Republic where he remains today.