'Waitress,' 'The Humans' & Other Broadway Shows Rising As 'Hamilton' Tickets Drop in Price 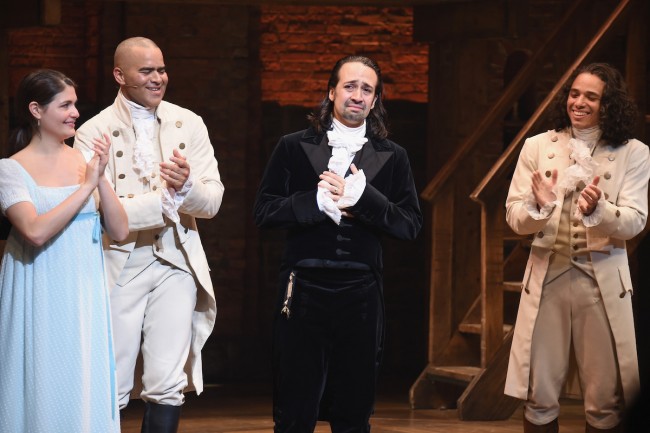 While Hamilton tickets are still a huge expense for many, the hype of the record-breaking show is starting to die down, with resale ticket prices dropping fast. With Hamilton cooling off, theater-goers and tourists are starting to realize that there's more than just this year's Tony winner to enjoy on the Great White Way. In fact, for many, some of the other offerings are preferred.

Take Stephen Karam's family comedy The Humans for example. A multiple 2016 Tony winner, including for Best Play, the story is full of hilarity, heart and horrors, and is a much different experience than the big showmanship that is Hamilton. The story follows the Blake family celebrating Thanksgiving in a run-down apartment building in Manhattan's Chinatown owned by the youngest member of the family, musician Brigid. The guests include a lesbian lawyer (her sister), an elderly woman with Alzheimer's (her potential mother-in-law) and her parents, who have a lot to say about the choices Brigid has made. Throughout the play, the family members deal with aging, illness and the realities of the 21st century. Tickets for The Humans are averaging $233 on the secondary market, and tickets have risen for good reason. The show played its final performance at the Helen Hayes Theatre on July 24, and moved to the much larger venue (an additional 482 seats), at the Gerald Schoenfeld, on August 9.

It wasn't too long ago when getting a ticket to The Book of Mormon at the Eugene O'Neill Theatre was as tricky as it is for finding one for Hamilton today, but that's no longer the case. The 2011 Tony Award winner for best musical is a satiric look at the Mormon religion through some of the most outlandish songs ever to grace the Broadway stage. Written by Trey Parker, Matt Stone and Robert Lopez-the same team that brought South Park to life-the show provides plenty of laughs and memorable music. It currently stars Christopher John O'Neill, Nic Rouleau and Nikki Renee Daniels, and tickets average $257 on the resale market.

The humor of Book of Mormon isn't for everyone, so if you're in search of a more traditional musical, Waitress, with music and lyrics by Sara Bareilles, and a book by Jessie Nelson, is probably more up your alley. The musical is based on a popular 2007 movie of the same name, which starred The Americans' Keri Russell and was written and directed by Adrienne Shelly, who was tragically murdered before the film's premiere. It follows the story of a waitress in an unhappy marriage to her husband, who gets pregnant and sees a pie-making contest as her way out of her troubles. It's currently playing at the Brooks Atkinson Theatre and stars original cast members Jessie Mueller, Drew Gehling and Keala Settle. Jenna Ushkowitz, best known as Tina from Glee, recently joined the cast as well. Tickets for Waitress are averaging $285 on the secondary market.

Another musical that is much beloved is Beautiful: The Carole King Musical, which follows the story of legendary singer Carole King and her rise to stardom. Chilina Kennedy is currently playing King, and the show also stars Scott J. Campbell, Ben Jacoby and Jessica Keenan Wynn. The show includes all the classic hits you would expect, including "So Far Away," "I Feel the Earth Move" and "You've Got a Friend." Tickets for the show, which plays at the Stephen Sondheim Theatre, are averaging $228 on the resale market.