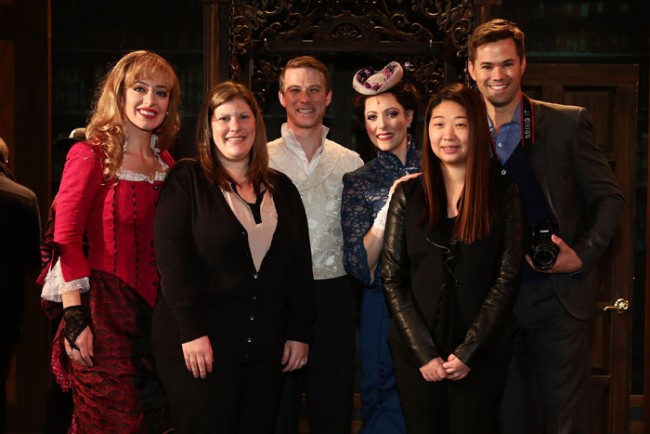 Andrew Rannells (R) poses with Canon executives and the cast from Broadway's 'A Gentleman's Guide to Love and Murder' for Canon #BRINGIT Tour on December 3, 2014 in New York City. (Photo : Neilson Barnard / Getty )

Late-summer into early fall tends to be a dry-spell period when it comes to Broadway ticket sales and attendance, as post-Labor Day is a time when shows close their doors and grosses take a huge dip. The lull rarely lasts longer than mid-October when the market takes a huge swing into the green around this time of year, and similarly after the Christmas season when March rolls around. This year, the October jump occurred just after Columbus Day holiday weekend for the resale ticket market, as the jump in average ticket price is actually 5% higher than it was at this time last year. Shows such as The King and I and A Gentleman's Guide of Love and Murder are particularly experiencing ticket price surges.

In 2014, there were under 30 shows on Broadway, while this year there are currently 31. The largest contributing factor to the huge leap in average price is a result of the all-encompassing hit Hamilton, which has an average resale price of $595, up by just under 7% from last week alone. On the primary market, Hamilton has been sold out for months. Similarly, The Book of Mormon took the Broadway world by storm after its opening. The Book of Mormon tickets are still on top too, with an average price of $288.81.

The only shows that did not have an increase in average price were Therese Raquin, which saw no change, and Spring Awakening, which took a slight dip by $0.66 in its secondary market price, according to data provided by TiqIQ. The rest of Broadway took a huge jump, most noticeably with The Curious Incident of the Dog in the Night-Time, now at $251, A Gentleman's Guide of Love and Murder, now at $239.53, and The King and I, which has been decreasing in price for weeks, but is back up in the mid-$300 range and securing its second place spot for the most expensive Broadway tickets.

Bumps in prices and demand are not just exclusive to the secondary ticket market at this time of year. The Broadway League released the gross numbers for the past week and they've shown a significant uptick as well. For weeks, the gross numbers have been taking a hit, with each week having a difference in the millions. This past week compared to the week prior, Broadway productions overall saw a leap in numbers and grossed over $4 million more last week than the week prior. Many believe the jump is due to the holiday weekend, which in some instances could be the case, however the more shows on Broadway, the higher the gross numbers will be. Last week three shows began previews, which helped aid the boost in gross. In its first week of previews, On Your Feet!, the jukebox musical depicting the life-story of Gloria and Emilio Estefan, grossed $970,013.

Broadway may be more of a tourist attraction now than about the true-art of theater, but regardless, numbers are up are on both sides of the equation. With this in mind, now is the time to get tickets for Christmas seasonal shows that are coming up, as tickets are on the rise at an ever increasing rate. Fans of the travelling production of Elf The Musical, which will be at The Theater at MSG this holiday season, has fans digging into a pool of Spaghetti and Syrup for a chance to grab Elf the Musical tickets, and of course there's always the Radio City Christmas Spectacular on top of the peak season for the general Broadway shows.

TagsBroadway Musical, broadway, The Book of Mormon, Hamilton, Spring Awakening, Spring Awakening, The Curious Incident of the Dog in the Night-Time, A Gentlemans Guide to Love and Murder, The King and I, On Your Feet, Gloria Estefan