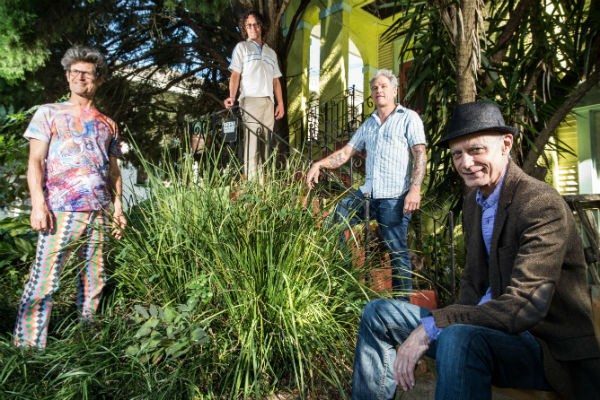 Star musicians who gig or record in the French Quarter of New Orleans, and who have to find a local rhythm section, usually do what Dizzy Gillespie did: come up with bassist James Singleton and drummer Johnny Vidacovich, they of Professor Longhair's band.

These two, as an established NOLA rhythm section, have been known as the go-to rhythmic thrust since 1977. Meanwhile, their friends -- vibraphonist/percussionist Mike Dillon and pianist Brian Haas -- have also been playing together for years in and out of the bands Jacob Fred Jazz Odyssey and Dead Kenny Gs.

So why not form your own damn band? You could call it Nolatet. And why not call your debut Dogs? Leave it to a hip label like Royal Potato Family out of Brooklyn to put this seven-track half-hour out! It's a carnivalesque fun-ride of exciting proportions: a mirror where shapes are distorted, and you never know where you're going but you're going fast, in and out of tunnels, over hills and down steep slopes. It seems like you're going to careen right into solid rock but you never do. And when it's over, you want to do it again. That's what listening to Dogs is like.

Nolatet (prefix from New Orleans, LA and suffix from Quartet) reeks of Crescent City madness. They're the type of musicians who play the kind of music where anything can happen -- and usually does. There's no ceiling. Dogs is accessibly outrageous, so much so that music fans who want some meat on the bones of their sound will have plenty to gnaw on.

Recorded in NOLA's Esplanade Studios in one day, "Pops," "Bongo Joe," "Dogs," "Morphine Drip/Lento," "There's No Fire," "Melon Ball" and "Nails" will bite your sweet spot, tickle your fancy and remain wholly satisfying for repeated listenings. It's like nothing that has ever came out of New Orleans and it's like everything that has ever come out of America's greatest musical city. Figure that one out.