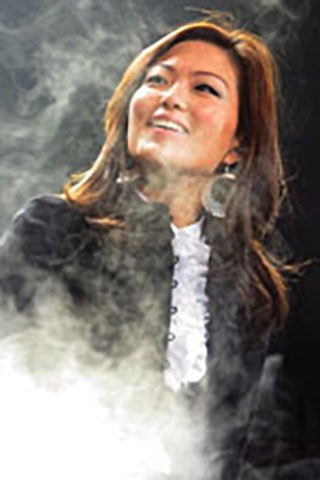 "Well they don’t get much sleep on the tour. I think they spend hours. They begin loadign in at 5am. So it takes all day. It’s a huge stage. Then when we’re done they have to take it all down and move to the next city." -- Mee Eun Kim (Photo : Trans Siberian Orchestra)

A sea of smart phones captured the extravagant laser lights, dragging in "Wizards In Winter" and "Music Box Blues," as well.  A wee bit of Led Zepplin's "Kashmir" interluded to more choice cuts from their two big rock operas: Christmas Eve and Other Stories and The Christmas Attic.

The hour-long show was part of an iHeartMedia entertainment production in the heart of Tribeca. There was, indeed, a lot of hair on the stage.

Further, TSO recently played a full arena show on December 18 at Nassau Veterans Memorial Coliseum in Uniondale, New York and again on December 21 at the Prudential Center in Newark, New Jersey--a true Christmas tradition, if ever there were one.

Classicalite: Thanks for jumping on a call from the road, where are you on your way to?

Mee Eun Kim: We are in Richmond, Virginia on the way to the Coliseum. Are you in New York right now?

MEK: I heard you were at the iHeart Radio, too.

Clite: Yeah, we were there. It was a phenomenal show.

MEK: Did you like it? It was fun because we got to be in a smaller setup. We’re so used to doing the arenas these days, so it’s nice to be in a smaller center, to really see everyone’s face and everything. It was really a lot of fun.

Clite: Yeah, it was. It was my first time, so I was glad it was at a smaller venue so I could get a sense of what you’re all about. How long have you been with the Trans Siberian Orchestra; how did it all begin?

MEK: I have been with the Trans Siberian Orchestra since 2000 actually. Very small beginning. The first tour they did was in 1999. It was just a few concerts. The first time they started to make it in the west and the east, so we could cover a lot of cities and space, that’s when I came in. I’ve been around for like 15 years.

Clite: So, let’s tie it back in to some of your own work. I’ve seen that you did Beyond with Tina Turner. How did you get involved with that? And was it at the same time as TSO?

MEK: Well a lot of TSO people have a great project going on when we’re not on tour. Although we’ve spent a fair amount of time preparing, we need like a month before the tour, but everyone is given a lot of work and music to work at home. For the rest of the year, there are wonderful singers and musicians doing a lot of projects, like spring and summer time, that’s when I do a lot of writing and production work. That’s my main thing when I’m not touring with the Trans Siberian Orchestra.

I live in Europe right now and Tina and her friend who were both on the Spiritual album did it in Switzerland. So I did most of the work in Austria, at home, where I live, all the production and the recording in Switzerland and some of the mixing in Germany. Thanks to the Internet and the computer that we were able to make all that happen. It was definitely a very interesting project as well.

Clite: Do you have a strong religious background, or do you find it easier to access music in the sense of keys, rhythm, piano fingerings, etc.?

MEK: Well, I do have kind of a religious background. My grandfather was a priest. A first generation priest in Korea. Christianity is about 100 years in Korea and I have many uncles who are priests. So I grew up going to church every Sunday. I played the organ. In Korea, we have one-day service Bibles, so I did play a lot of organs and piano and all the Christmas carols. So when I joined the orchestra, it was kind of perfect because I knew all the Christmas carols. That's how I got involved with the Beyond project.

Growing up in Korea, which is also a Buddhism oriented country, although we do have a lot of Christians, I kind of adopted a feeling for both cultures, I would say. It was really challenging to put two different worlds into one music through the harmony. That was the only thing that could bring the two cultural differences together. It was a challenge and the ladies who are singing are actually chanting. They’re singing the prayers without any music underneath. I collected songs together and make it into one song.

MEK: It just blows my mind. Each year, we just, I’m so happy and impressed. A lot of people just keep loving us and buying the albums. As we do the live performances I think that’s when they really become a Trans Siberian fan and they just go buy the album. Two years of live performances of the Christmas Tour gives a big kick, or a push, for the record sales as well. They’re just really blown away by the show because they go out there and it’s the album. I believe when people come and see the show, they’re blown away and I think that’s what gives them the motivation or inspiration to go out there and get the record.

Clite: Do you have a big New Year’s plan?

MEK: For New Year’s Eve, I think we’re all going to be together. We’re a family. We’ll continue our tour until the fifth of January. So I heard some rumors that we will be having a nice little party together. On the road.

Clite: What does the rest of the year look like for you guys? I know you said you work on several different projects in the spring and summer, which gives you some time to be somewhat individual.

MEK: We have so many people doing so many different things, from the singers to the band members. Joel Hoekstra, is now a member of Whitesnake. Our music director, besides all the work he does for the Trans Siberian Orchestra, is doing a lot of film music. I’m doing some music for TV production and producing and writing for a Korean singer in Europe. They all have their own thing going on actually. I can tell you for the next five hours. From classical, to rock bands, to pop, to musicals; that’s the greatest thing about this band. The Trans Siberian Orchestra is made with so many versatile and different genres of musicians. From classical to Julliard graduates. I went to the Berkeley College of Music, studying orchestration. We have the really heavy metal guitar players to bluesy singers, we have it all. That’s what makes it really colorful and really special I guess.

Clite: Absolutely, I agree. You give it the well-rounded feel because you have everyone. You guys are playing with Savatage in 2015 at Wacken Open Air, tell me about that.

MEK: Savatage hasn’t played in 15 years, so both Sabotage and Trans Siberian Orchestra will be headlining the festival. We’re really excited about that and that’s going to be the one and only show, the one and only performance in 2015. I know Paul has a lot of surprises that he’s working on so it’s going to be amazing. I cannot wait for it myself

Clite: Are you going to play your Christmas classics there, perhaps out-of-season?

MEK: Christmas music, there? I believe it’s going to be summertime so we’ll probably do the best of all our hit songs. And maybe we’ll surprise and do a couple of our Christmas songs. We don’t know yet. We’re still making the best of this weekend.

Clite: A nice surprise for 2015. What’s next with the TSO, any new recordings coming along?

MEK: Yes, Paul and all of us are coming in and writing constantly and working on a couple of records. I’m not so sure which one is going to be coming out first. I think that’s going to be sometime next year, but I couldn’t tell you which one because he has so many stories and things that he works on at the same time.

MEK: I believe it’s going to be the sound of Trans Siberian Orchestra will be that rock and classical sound together and there will be a story like every album. I think it’s more of a rock opera.

It’s going to be a spectacular season. Every year it’s getting bigger. Even for the band members like myself. We come back to rehearse and we’re just blown away by the hard work of the production chain. We just have the top of the line in the whole world. We have the best. We work very hard. We pull two shows a day. We’ll run through it once and nobody complains. I’m so proud of being a part of a group who’s feels so proud to be a part of it. Hardworking when we’re together, always smiling no complaining and just putting up a good show. Even surprises us, and it exceeds everyone’s expectations each year. Not only musically and artistically, but also visually we have a great package of visual and the sound. So, each year I’m so happy and blessed to be doing this. This whole group of wonderful and talented musicians and the production team.

Clite: The production is fantastic. How long would you say it takes them to set up for a show?

MEK: Well they don’t get much sleep on the tour. I think they spend hours. They begin loading in at 5am. So it takes all day. It’s a huge stage. Then when we’re done they have to take it all down and move to the next city.

Clite: How many crew members do you have?

MEK: That’s a good question. I know between the two west coast and east coast companies we have about 300 people moving around.

Clite: That’s including the band members?

MEK: I believe with the band members, which is what 20-something numbers. We have a lot more crew guys who are putting this up for us to do our thing.

MEK: Yeah, between the two I believe that’s kind of what it is.

Clite: What is your personal Christmas holiday tradition?

MEK: With my family, just eating really good food and making a fireplace and being cozy. Just being with family and listening to Christmas music. I mean for me, being Korean living in Austria, it’s probably not as traditional as the Europeans or Americans, but my favorite part of Christmas is feeling the warmth in the house, when you know it’s cold outside, you’re safe and cozy inside. That, for me, is the best part.

Clite: I would have to agree, most definitely.