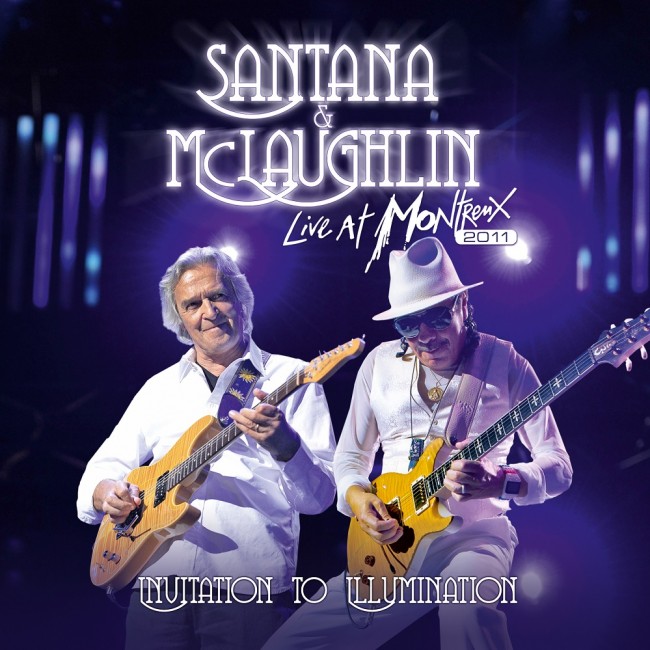 Guitarists Carlos Santana and John McLaughlin had already headlined the legendary Montreux Jazz Festival in Switzerland numerous times with their own bands but in 2011, in their only show together, provided a mystical, magical, profound, spiritual and loud experience. Going into their jazz-rock fusion handbook, they performed majestically, switching leads, switching genres and cheering on their own wildly percussive band (including wife Cindy Blackman-Santana, a powerhouse drummer). Now, for the first time on CD (you can also get it digitally and on DVD or Blu-Ray), Santana & McLaughlin are Live At Montreux 2011 on their "Invitation To Illumination" tour (Eagle Rock Entertainment).

Over two hours long, this is a master set that includes much of their 1973 Love Devotion Surrender project but it's the covers that shine the brightest. With 12 people alternately roaming the stage and providing big sound (including the former Montreux promoter Claude Nobs on harmonica for the fitting finale of John Lee Hooker's "Shake It Up And Go"), the respect of these two guitar titans for each other is evident. Each lays back when the other soars. When both soar simultaneously, the rhythm section catches fire. The band itself, three guitars, two drummers, keyboards, percussion, two bassists and two vocalists, sizzles throughout.

Who else but the genre busting Santana would include a medley of John Coltrane ("Peace On Earth"), Bob Dylan ("A Hard Rain's Gonna Fall" with no lyrics) and Led Zeppelin ("Stairway To Heaven," mercifully short)? Whether it's Miles Davis ("Right Off" and "Black Satin"), Tony Williams ("Vuelta Abajo" and "Vashkar"), Pharoah Sanders ("The Creator Has A Master Plan" and "Venus/Upper Egypt"), more 'Trane ("Naima" and a much-too-long "A Love Supreme") or Elvin Jones ("Downstairs"), the spiraling ascent of the band's intensity as the concert builds is absolutely religious.

You get caught up in it. Carlos doesn't mind adding to the musical church with some well-worn words of wisdom between-songs ("make every day the best day of your life"). Yeah, he's a Shaman, all right, the real deal. And McLaughlin, to his credit, knows whose show it is. Biggest surprise, though, has to be the absolute machine gun attack of Cindy Blackman-Santana. She's a propulsive force pushing, instigating and prodding this big hornless band forward.