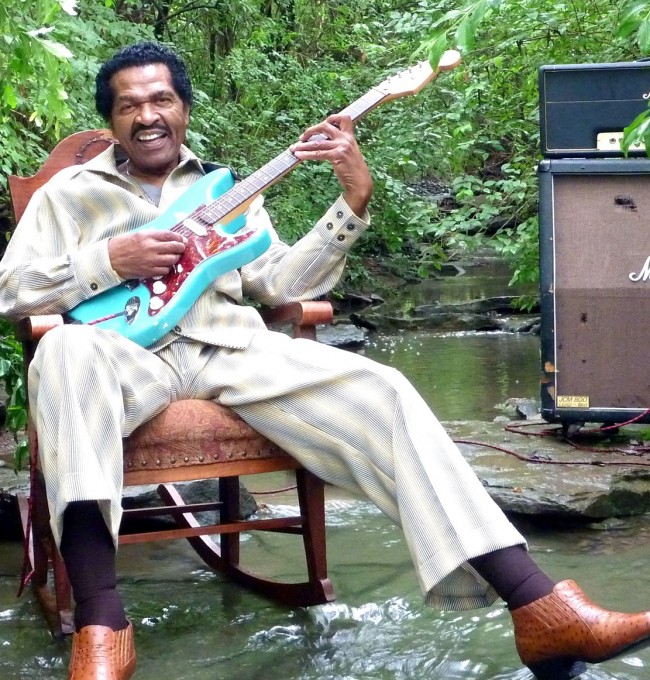 Bobby Rush hanging out in the Bayou (Photo : April Brown)

The 74 songs on the four CDs of Bobby Rush's first comprehensive career overview-in-a-box are sterling reminders that this man has sealed his place in blues and funk history without a whole hell of a lot of people knowing it. Chicken Heads: A 50-Year History Of Bobby Rush (Omnivore Recordings) is proof positive that when it comes to slippery greasy deep south funk and the kind of blues that make you want to rip your skin open, Bobby Rush, 80, should be on Mount Rushmore.

Starting in 1964 with a blood-drenched slow blues like "Someday," complete with electric-shock lead guitar and the kind of sax solo where you can feel the life ebbing away to nothingness, this Louisiana man has climbed Mount Everest and back over the last five decades. By '66, he was screaming the blues in Chicago but was known more for a funked-up dance greaser ("Sock Boo Ga Loo"). Hell, it was better than "Let Me Love You" where the producer forgot to turn his microphone on during the verses.

In '68, he thought he still had to funk it up to sell so he did. Always wildly experimental, Rush rushed in where wise men fear to tread and cut single after single of sledge-hammer funk and pretty-boy soul. But he never forgot about the blues. Songs like JB Lenoir's "Talk To Your Daughter," Guitar Slim's "The Things That I Used To Do," Sonny Boy Williamson's "Nine Below Zero" and Stick McGhee's "One Monkey Don't Stop No Show," in the hands of a master showman like Bobby Rush, all sound superior to their original versions.

Besides the almost five hours of fatback funk, blues and soul, this meticulous package comes complete with a 32-page booklet, testimonials from his famous fans like Mavis Staples, Keb Mo, Elvin Bishop, Leon Huff and Al Bell of Stax Records in Memphis.

Hey, when you've been in the bands of masters like Elmore James, Howlin' Wolf, Muddy Waters and Little Walter, some stuff gotta rub off.