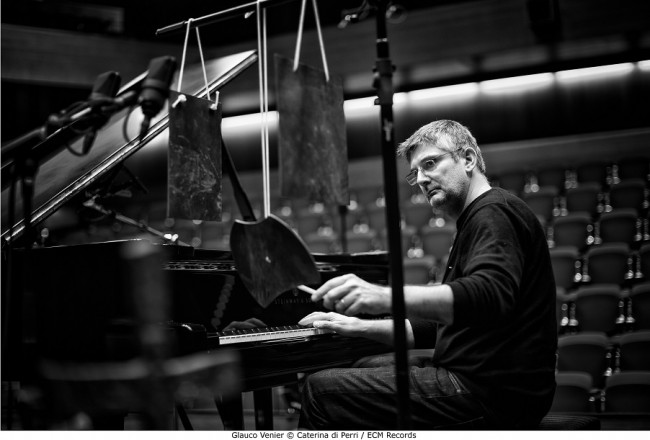 The gongs, bells and metals that are hung by strings next to his piano make Glauco Venier's solo ECM Miniatures debut something of a landmark recording. Solo piano is one thing, and Venier had to be well aware of the iconic performances of such already recorded on this legendary label. Thus, he wanted to add something: his own arsenal of percussive effects.

In the small Northern Italy village where he was born, raised and still lives, Venier played church organ as a boy, having fond memories of practicing for hours by himself in the dark during cold winters. His studies delved into Italian Renaissance and baroque composers, most inspirationally the works of Olivier Messiaen. One can, indeed, detect the influence of the ancients in these 18 tracks.

When a call came to contribute to a documentary film about sculptor Giorgio Celiberti, Venier had a piano installed in Celiberti's loft so he could react pianistically to Celiberti's creations. It proved to be a great idea as Celiberti provided the whirligig percussive mobiles that Venier could touch, prod, push and poke while playing piano, among which were tuned metal crosses with bell-like sonorities suspended on string.

Venier took it one step further, though, hearkening back to the music of Harry Bertoia [1915-1978], a composer who, decades before the advent of ambient music, created what he called "sound sculptures." It all went into the mix. Most of the music is impromptu, improvised in the moment, but certain tracks, like "Gunam," were brought to the session. Venier first played this one backing up singer-songwriter Alessandra Franco.

One doesn't listen to this as solo piano (although it is). Between all of the various percussive effects played simultaneously to his 88s, a "one-man band" sound emerges. There's the difference that Venier was going for, and it's a difference that puts it at least one step ahead of the usual solo piano sub-genre.