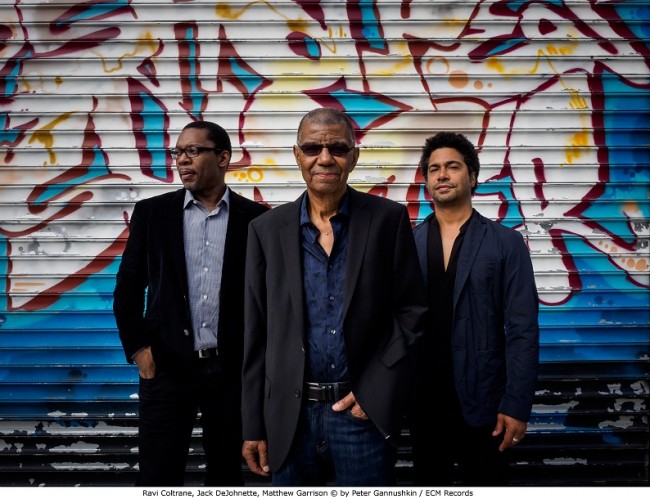 Drummer Jack DeJohnette, 73, has played on more ECM records than any other musician. Why, then, is the In Movement ECM debut of his new trio with saxophonist Ravi Coltrane and bassist Matthew Garrison major jazz news?

Ravi is the son of John Coltrane [1926-1967], with whom DeJohnette played. Matthew is the son of Jimmy Garrison [1934-1976] who was the bassist of the original classic Coltrane quartet. DeJohnette also played with Miles Davis [1926-1991]. In fact, Miles was once quoted as saying, "Jack gave me a deep groove that I just loved to play over." One listen to the groundbreaking Bitches Brew will testify to that. One listen to In Movement will testify to the fact that this recording is not a rehash of the past. In fact, it points to the future.

Garrison here plays electric bass exclusively. He's also responsible for the electronics. Starting with John Coltrane's elegy for the Civil Rights struggle "Alabama" and continuing with a trio original, "Two Jimmys," for Garrison's father plus Jimi Hendrix [1942-1970], a template is set In Movement that continues with the Miles Davis/Bill Evans impressionistic "Blue In Green." (DeJohnette also played with Evans [1929-1980]). The sound is different from those far-away and long-ago classics. It's the sound of a new generation anchored by the indestructible DeJohnette whose two feet are firmly planted in both camps.

Earth Wind and Fire's "Serpentine Fire" is next. Yes, DeJohnette played with EWF's Maurice White [1941-2016] too. "Rashied" is for Rashied Ali [1933-2009], 'Trane's great drummer during his most way-out "free" phase. DeJohnette stretches and for the first time in quite awhile, gets to play piano on the aptly-titled "Soulful Ballad." "Lydia" is for his wife.

If one is unaware of all the familial and historic connotations here, one would still love this kinetic project with one master and two disciples who have grown into being the kind of forward-thinking jazz stars for their own generation, the type that their parents would've been so proud of.