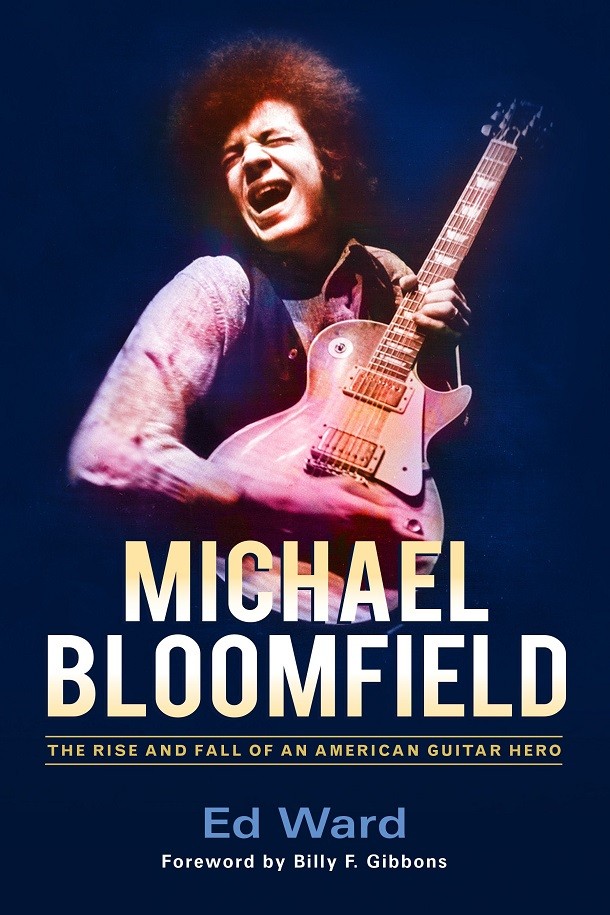 Quick. Who's the greatest 1960s guitar hero of them all? Hendrix? Clapton? For my money, it's Michael Bloomfield, the dead Jewish junkie who was so tortured, he had to take heroin just to sleep. When Bob Dylan went electric at the 1965 Newport Folk Festival causing Pete Seeger to scream out backstage in frustration and want to unplug the electricity, it was Bloomfield shrieking out the power chords. When Janis Joplin wanted to get her solo act together, it was Bloomfield in the studio with her. Ed Ward's slim 1983 bio has been finally fully fleshed out into Michael Bloomfield: The Rise and Fall of an American Guitar Hero (Chicago Review Press, hardcover, $26.99) and it's a revelation.

Bloomfield took some LSD once and figured out the kind of jam that The Paul Butterfield Blues Band made famous on its groundbreaking 1966 East/West album, the album that changed all the rules and opened the doors for The Allman Brothers and their jam-happy aesthetic. The title track, which Bloomfield co-wrote, ended the LP on a 13:10 prophetic vision for what rock music would ultimately morph into.

Before Bloomfield, guitarists weren't any big deal. It was always the singer. He single-handedly changed the rules. When he formed his own band with drummer Buddy Miles, Electric Flag, and played the 1967 Monterey Pop Festival, his future was seemingly secured but the band fell apart via drugs and egos. I was 17 when his 1968 Super Session album came out with Stephen Stills and Al Kooper. I had no idea that the only reason Stills was called into it was because Bloomfield disappeared leaving Kooper in the lurch. He was always disappearing.

After freaking out the friendly folkies in 1965 at Newport, Dylan begged him to be in his band and go on the road. Instead, he revolutionized rock'n'roll with Butterfield. He had the soul of a 78-year old Mississippi rural bluesman. As a teenager, he'd haunt all the black clubs on the south side of Chicago, ingratiating himself with Muddy Waters. It's his guitar all over Dylan's 1965 Highway 61 Revisited. Yet by 1973, rock critics were asking that age-old question, "whatever happened to..."

The answer is professional suicide. After he made his mark, Bloomfield's career choices were horrible. He was so damn talented that big-time 1974 music-biz execs tried their best to revive his flagging career and get him in a successful situation. To that end, they fashioned a super-band project for him called KGB with drummer Carmine Appice of Vanilla Fudge, bassist Ric Grech of Blind Faith, pianist Barry Goldberg (with which he recorded the Two Jews Blues album in 1969), singer/songwriter Ray Kennedy (who wrote "Sail On Sailor" for The Beach Boys). One album later, he'd quit, citing reasons that the music wasn't honest enough, only there to make money. He hated being a star. Hated the adulation. His sense of self-worth was dramatically skewed to the point where he'd pop up and do gigs anywhere and anytime just to play.

The book reads with a mounting sense of dread and suspense because the reader knows he's a doomed and tragic rock star. The end came with him slumped over in his car with the doors locked on February 15, 1981, from a drug overdose at the age of 38. With a forward by Billy Gibbons of ZZ Top, Ward's book also features an elongated and complete 1968 Rolling Stone interview he did with Jann Wenner and an exhaustive discography.

I thought I knew everything there was to know about Michael Bloomfield. I was wrong. I devoured this book and, in so doing, learned so much about the man I admired as a teenager. I never knew, for instance, that there was a period of time he would learn fire-swallowing techniques to incorporate into his stage show.