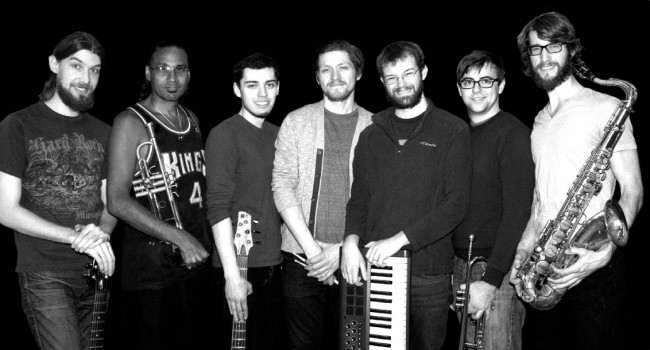 The Long Slog (Browntasauras Records) by Snaggle is a hoot! Like their American counterparts in Snarky Puppy, Snaggle challenges with differing tempi, alt-jazz solos, funny song titles, inspired group chemistry and groovy experimentation. Randy Brecker loves them and that’s good enough for me. Keyboardist Nick Maclean, trumpeter Max Forster, tenor saxophonist Graeme Wallace, guitarist Michael Murray, bassist Doug Moore and drummer Tom Grosset have been produced on this, their sophomore effort, by trumpeter Brownman Ali. The result is a wild ride. Buckle your seat belts, baby. This is some totally original way-out-there stuff, surprising in its dexterity, alluring in its alternative stance. Funky as all hell, and pushed forward by Grosset (who is in the Guinness Book of World Records as the “World’s Fastest Drummer”), Snaggle aims to confound, delight and blow you away. I’m partial to “Track 5,” which is the fourth track on the CD. See? There’s no concrete reasoning here. Art is ephemeral. “Snaggle #7” is, inexplicably, the first track and right away you know this ain’t any Kenny G oatmeal for folks with no teeth. Just go with it.

One of the most left-field yet endearing jazz vocalese albums of the year comes from a Seattle duo called Sundae + Mr. Goessl. Their self-released Makes My Heart Sway (the follow-up to 2014's Cheek To Cheek) contains individualistic, idiosyncratic and totally unpredictable takes on "Love Me Or Leave Me" (from the 1928 Broadway musical Whoopee!), "Do You Know What It Means To Miss New Orleans" from the 1947 film New Orleans, Benny Goodman's 1936 "Stompin' At The Savoy," Frank Sinatra's 1953 "Young At Heart," Antonio Carlos Jobim's 1960 "One Note Samba," Nat King Cole's 1948 "Nature Boy," silent film screen star Charlie Chaplin's 1936 "Smile" (Michael Jackson's favorite song) and even "Low Down Man" from 1990s alternative band The Squirrel Nut Zippers. It's all sung with vague insouciant flair. So while Mr. Goessl plays zippy acoustic curly-cue guitar spirals, Sundae is sweet with oddball sexiness, scatting and putting these songs over with no known precedent or influence except, maybe, Betty Boop.

I call these boys avant-accessible. They call themselves Earprint, and their self-titled debut on Endectomorph Music is a doozy. That's right, it's a grade-A certifiable woozy doozy highly groovable 11-track trip that is, according the band in the liner notes, "aggressively melodic, shamelessly youthful." Thing is, you see, they have zero chords. Ain't a damn chord on the whole CD. The four chord-less instruments zig-zag sharply, making severe turns demanding attention. It all hangs together precariously due to the balls and chops of Tree Palmedo (trumpet, ocean drum), Kevin Sun (tenor sax, clarinet), Simon Willson (bass) and Dor Herskovits (drums) from the Pacific Northwest, New Jersey, Chile and Israel respectively. They met at the New England Conservatory. If you hear traces of Ornette Coleman throughout the proceedings, you have a good ear. Otherwise, this alt.sound project approximates drones, rock ("The Golden Girder Strikes Again") and even the inner workings of a clock ("Clock Gears"). Highly recommended.

The self-released Dark Angel by the John Weeks Band stretches the blues inside-out and shakes it upside-down. Guitarist Weeks is from France. Keyboardist Danny Haynes is a Texan living in Australia since the 1990s. Jump-Blues shouter Stacey Turpenoff is St. Louis born and bred. The drum/bass rhythm section is an Ohio/New York machine that keeps things percolating over the course of 10 original tracks of bluesy rockin' soul. There's more than meets the ear here, especially during repeated listening to songs like "The Hole," "The Blues Just Got More Blue," "Devil In My House" and the closing title track. Plus, word has it they're a terrific live band so should they come close, get on out and shake it some.

Take a time trip back to 1968 when hippies ruled the music roost in San Francisco. Marvin Gardens is a band that liked their folk music but added rock instrumentation like The Byrds did with Dylan. The folks at High Moon are calling it "rare late-'60s Electric-Folk/Garage-Psych" (for psychedelic, man!). A band that never actually "made it" (maybe because they never figured out how to write their own material), the band came to fruition in the national label frenzy to sign Bay Area upstarts right and left. They're fronted by a wisecracking lesbian from Buddy Holly's neighborhood in Lubbock, Texas. The late leather-lunged Carol Duke liked her Odetta and Buffy St. Marie records but took her cue from her Bay Area neighbors in Jefferson Airplane and Big Brother & The Holding Company. The gal could sing! Their lone original ("Whips and Leathers") was inspired by the gay bars where they got their start. Most fascinating is their amalgam of covers: Dylan, Lead Belly, Eric Anderson, songs in the Public Domain, Hoagy Carmichael and Mississippi John Hurt, all set to a hippie rock beat.

Bing Futch is the Taj Mahal of his generation. Like Taj, he’s a multi-instrumentalist who uses the blues as a base for his organic Americana. His instruments of choice include mountain dulcimer, ukulele and Native American flute. He wrote, performed, produced, recorded and released the 12 tracks of Unresolved Blues all by himself playing dulcimer and singing before using “Band-In-A-Box” to provide some drum’n’bass. Like Taj, he does a masterful version of Robert Johnson’s “Sweet Home Chicago,” the traditional “Cluck Old Hen” and “John Henry.” He also interprets Tampa Red’s “It’s Tight Like That.” Mostly, though, it's his originals that shine with delight like his closing mash note to his “Red Headed Lover” wife. He’s the author of the highly successful Blues Method For Mountain Dulcimer 101 and regularly teaches his “Blues In The Schools” course at various educational institutions. In my book, Bing Futch is a modern American hero.