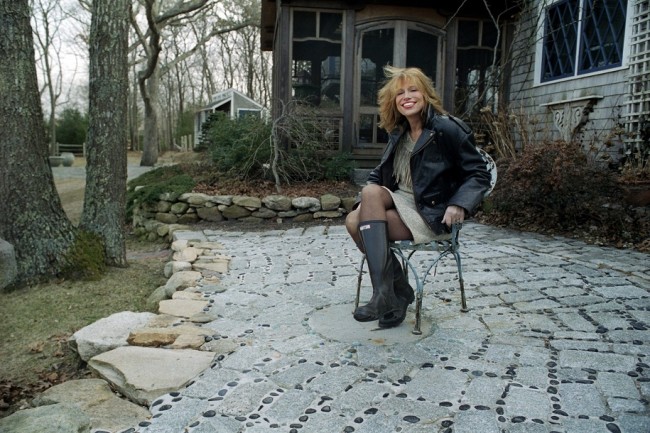 Singer-songwriter Carly Simon's Boys in the Trees memoir is now out in paperback and the tale told is riveting. Blessed to be born into a wealthy Manhattan family with a father, Richard L. Simon, who co-founded the giant publishing house Simon & Schuster, Carly's childhood was a whirlwind of dinner parties with guests like Benny Goodman, Vladimir Horowitz, Jackie Robinson, Dwight Eisenhower, Richard Rodgers, James Thurber and Oscar Hammerstein dining at their elegant abode at 133 West Eleventh Street or at their beach house on Martha's Vineyard in Massachusetts or their palatial Connecticut estate.

The youngest of three glamorous sisters, the story doesn't really get going until, as half of The Simon Sisters singing duo, they're performing onstage when Carly notices the legendary Odetta at a ringside table. Odetta! She idolizes Odetta! So she promptly faints and practically lands in Odetta's ample lap. This embarrassing incident is only the first of a career-long attack of stage fright, exacerbated by a severe stutter.
You'll find yourself rooting for this poor little rich girl when her father is forced out of his own publishing company. Carly can write. Her prose is poetic. She seems to have a natural instinct for sentence construction to the point where you might even re-read certain segments again. (I, on more than one occasion, just had to read it aloud to whoever would listen.) No co-writer for her! By the book's mid-point, you'll feel you know her enough to understand the stories behind the songs. And oh what stories they are!

She goes solo at 20 and gets a call from Bob Dylan who offers her his "Baby, Let Me Follow You Down" to record. It seems like everybody wants a piece of Carly. Redd Foxx exposes himself to her. Marvin Gaye sticks his tongue in her mouth. Actors Warren Beatty, Jack Nicholson and Sean Connery (who ultimately opts to seduce her older sister), singers Cat Stevens, Kris Kristofferson, Mick Jagger and James Taylor (whom she marries), guitarist Robbie Robertson, author Michael Chrichton, film director Pierre Cottrell plus various musicians and producers ("I was gently passed around," she admits) all loved Carly in one way or another. Boys in the trees, indeed!

The sessions for the Dylan project include Michael Bloomfield (all business), members of The Band, Al Kooper and super-manager Albert Grossman who almost immediately asks her, "when are you and I going to get it on?" The girl was a sex magnet, a real hottie. The tune never goes anywhere but the experience is good enough to recount in exquisite detail.

Heroin rears its ugly head when James Taylor demands she watch him shoot up. "This is what I do," he proclaims. "Watch! I can't have you and the habit at the same time. I just can't. I've got to get rid of this. Maybe if you see me do it, it will take away the cat-and-mouse game. You have to watch me. I have to let it all go."

James and Carly become THE New York couple, both with hit albums and (despite her stage fright) tours. Then James takes a girlfriend and sets her up in her own apartment. Carly somehow gets a key to that apartment and walks right in one night when James is back home in a stoned stupor to confront the homewrecker. It's like a scene out of a Hollywood movie made all the more profound because it's true.
The divorce is ugly. But they remain friends. Her foul moods, her stuttering, her sense of entitlement shattered, her weight gain, her divorce and her damned stage fright all combine to get the better of her. It's all here. Blunt, honest, written so gorgeously, you cannot help but understand and empathize.

There are more important artists out there, sure, but I dare say that Boys in the Trees is the kind of book that even if you don't care what songs are written about which celebrities, you'll find yourself totally engrossed. ("You're So Vain" is a composite of characters but other songs were written for some of the aforementioned names). Like Patti Smith's Just Kids or Bob Dylan's Chronicles Volume #1, Carly Simon's book has the ring of truth to it, unfiltered by a co-writer and written by someone who can actually write.