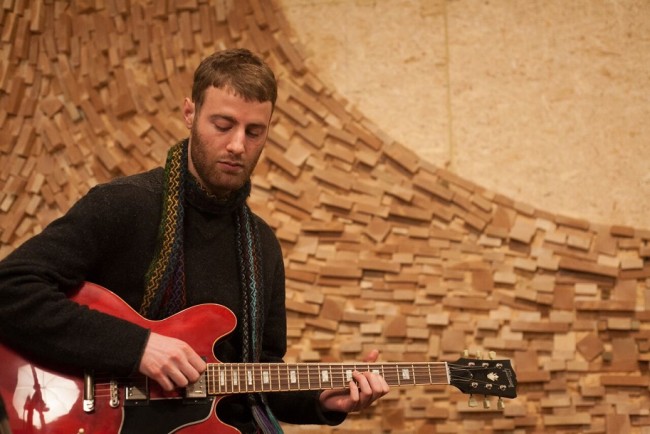 The Alex Levine Quartet dazzles. (Photo : courtesy of the artist)

Although the Alex Levine Quartet always seems to gravitate Towards The Center (Outside In Music), they veer sharply left toward the end of this all-original 63:40. Levine is an intuitive New York City guitarist who interacts with sax man Marcus Elliott, bassist Ben Rolston and drummer Stephen Boegehold in a way that presents the strengths of all four. As a composer, he doesn't necessarily take a straight line to his goal. He likes the roads less traveled, be they bumpy, unpaved or filled with potholes. Although the first 10 compositions contain mystery, drama, taut emotion and languorous sensuality, the last three tracks-"Implosion," "Adama" and "Wax"-go wild with uninhibited wanderlust.

Matrix (ShoreThing Records) by Washington DC's Fred Hughes Trio (their eighth) is a healing trip through 13 interpretations of some of the world's greatest composers. Hughes is seemingly a 30-fingered pianist whose flights of fancy are perfectly followed by bassist Amy Shook and drummer Frank Russo. On and on they go from the Gershwins to Chick Corea; from Horace Silver to Bill Evans; from Dave Brubeck to Herbie Hancock. Each performance builds on the previous one and by the you get to Bach and Tchaikovsky, you're totally in thrall to what they're laying down.

Time to hit Brazil for some exquisite samba, courtesy of the Leandro Cabral Trio. Alfa was named after the venue where this live recording took place: The Alfa Theater in Sao Paulo where the acoustics are sublime and the crowd ecstatic. Pianist/Composer Cabral wrote seven of 10. Bassist Sidiel Vieira and drummer Victor Cabral are joined by vocalist Vanessa Moreno and saxophonist Cassio Ferreira for "A Danca" but the other nine are wildly syncopated dances of counterpoint amid the kind of rhythmic thrust that should make you move and groove. Besides the obligatory Antonio Carlos Jobim covers, this is an exercise in Bahia Music, the kind of joyous carnivalesque sound where tropicalia meets Afro-Brazilian. Get on up!

Don't you dare mess with Leigh Pilzer. This may be her debut as a leader but the bari sax lady has a Masters in Jazz Studies and Saxophone Performance from the University of Maryland where she is now a professor. She gave up the cello for the power of sax and can she blow! She wrote six of eight on this 62:58 stick of dynamite. You can hear traces of Lee Konitz in the title track while "Miss Ally in Allyworld" is arranged with Ellingtonian flair. "Brag Time" is blues and "Duel At Dawn" is bebop. With able help from trombone/drums/bass/piano, her tone, her sound and her phrasing is such that she's going to be around for a very long time.

Any project that super bassist Christian McBride is involved in is an immediate listen. The Beast (Iola Records), the debut of drummer/composer Jerome Jennings, has a trombone/trumpet/tenor sax front line buoyed by a piano/drums/bass rhythm section that makes this one of the more exciting jazz debuts of 2016. Be it from the books of Ben Webster ("Did You Call Her Today") or Freddie Hubbard ("The Core"), these guys swing with severity. They bop with elasticity. Jennings, from Cleveland, even pushed Sonny Rollins forward as part of The Master's band. Here, he's a monster but never gets obtrusive or overly bombastic. He wrote the title tune after being harassed for an hour on the side of a Princeton, New Jersey highway by an overzealous officer of the law at 2:00 in the morning as he was driving home from a gig. Other highlights include "Ice Cream Dreams," written in 1913 to approximate the Mister Softee truck theme that pervaded the streets of Philadelphia for decades, now updated into 6/8 time. As an actor, he portrayed Chuck Berry's drummer in the one of my favorite all-time rock'n'roll films, Cadillac Records. Highly recommended.

Toronto's Modus Factor is in "The Picasso Zone" (Browntasauras Records) on a 10-track burst of electricity starring drummer Chris Lesso, electric trumpeter/producer Brownman Ali and bassist Ian De Souza. They call this improvised craziness "electro-ambient improvisational bedlam," and, to be sure, most of this falls into the realm of spontaneous composition. "Still I Rise" even features poet Maya Angelo [1928-2014] reciting her poem of the same name. Recommended with reservation.