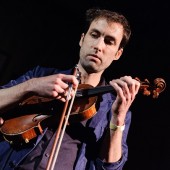 Last month, Andrew Bird and Fiona Apple released a collaborative single entitled "Left Handed Kisses." Now, stopping by the Ellen Show, the duo performed their song for live TV with a backing band. In it, Bird plays a violin while Ms. Apple sings with a visible and believable rage.

'Holler If Ya Hear Me' in Dire Straits on Broadway >>

Producers are looking to creative marketing and new investors to keep the struggling rap musical going.

If you missed the Academy Awards ceremony on Sunday you, literally, may have been the only one. Oscars telecast ratings hit a 10-year high on March 2 with a 43 million-strong American viewership--it broke a Twitter record, too.