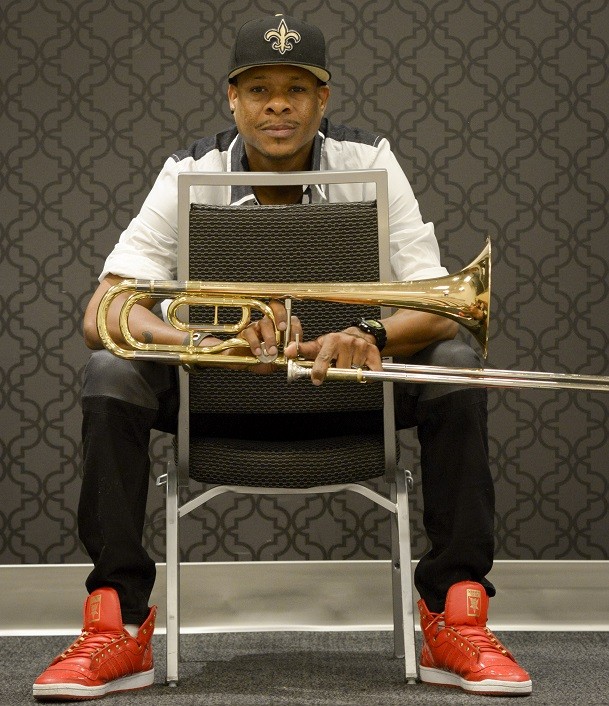 Trombone man Corey Henry grew up in the Treme section of New Orleans amongst musicians. A member of Galactic since 2009 (the internationally known Louisiana jam-band), his solo debut on Louisiana Red Hot Records is a 2016 Best-Of entry. Lapeitah (pronounced la-pee-tah) is a traditional Crescent City dance and dance you will on this kitchen-sink of a mix that contains eight vocalists (check out Living Colour's Corey Glover singing lead on Jimi Hendrix's "If 6 Was 9" at blog's end), four trumpeters (including his daughter Jazz Henry and the last known recordings of Travis "Trumpet Black" Hill who died from a dental infection in 2015 at the age of 28), five saxophonists, two trombonists, two tuba men, four bassists, three keyboardists, four drummers and an electric violinist. Henry co-produced and wrote or co-wrote nine of the 10 barn-burning totally funked-up joyous tracks. THIS is the album that Trombone Shorty has yet to make.

In-demand New York City guitarist/composer Larry Corban takes time out from the pit orchestras of numerous Broadway musicals as well as Radio City Music Hall Christmas shows with the Rockettes and even the Big Apple Circus to return to Corban Nation (Nabroc Records; spell it backwards). This former member of trumpeter Roy Hargrove's band, on his third release with The Aperturistic Trio, barrelhouses through eight originals and a stunning cover of Charlie Parker's "Segment" with bassist Harvie S, keyboardist James Weidman and drummer Steve Williams. Saxophonist Steve Slagle makes it a quintet on the opening "In-Vision" jam, the title track and a delectable slice of deliciousness called "Slow Fizz" that rambles on for 7:23. Recommended.

"If you've been to Mississippi at the crossroads in the rain/Heard a wailin' on the wind you'd swear was callin' out your name/The cry of Robert Johnson with the fire at his heels/Well, I hear it every day now and I know just how it feels."-Derrick Procell on the title track of Why I Choose To Sing The Blues (Hear and Now Music). The story-songs contained herein corral the ear because Procell can truly sing up a storm. When he opens with "The Wolf Will Howl Again," you listen and listen hard. It grabs your ear and won't let go. Whether it's "The Eyes Of Mississippi" or "Who Will Tell Lucille," his subject matter gets under your skin so while you're groooooooving to this solo trip (Procell provides his own keyboards, mouth harp, bass and drum programming), complete with guest guitarists, drummers and singers (including Billy Branch, Bob Margolin and Eddie Shaw), there's still room to chew on what he's spewing out lyrically. I call it "blues-plus." He has his pulpit and this is one congregation I want to be a part of.

Maybe drummer Franklin Kiermyer would've been his generation's Buddy Rich, a superstar with vision enough to transcend jazz like Rich into the larger pop culture. He's certainly got the talent. Two startlingly good 1994 albums (Soloman's Daughter featured Pharoah Sanders, the ex-Coltrane sideman) were followed up with...nothingness. Like singer/songwriter Leonard Cohen [1934-2016], Kiermyer opted to follow success by studying with a Tibetan Buddhist monk for 12 years. It was a time of meditation deep in the Himalaya Mountains in India where he'd sleep under the stars or in caves. He came back in '99 to record Sanctification, then again in 2014 for Further. That's why the release of Closer To The Sun (Mobility Music) makes for headline jazz news.

Produced by Michael Cuscuna, the 13-track stunner features a new band made up of sax man Lawrence Clark, pianist Davis Whitfield and bassist Otto Gardner. One room. No headphones. Little mixing. No overdubs. No edits. Thirteen tracks. Taken from a five-week Brooklyn span, three hours a day, it opens with "Greetings To Pharoah" before "Unified Space-Time" and "Ota Benga" makes one sit up and take notice. The solos spiral upwards as "Song For My Daughters" and "Prayer" give way to "Mixed Blood" and "Humanity," highlights all. The freedom with which Kiermyer gives his band is exhilarating, thus all four musicians get to shine yet their individual contributions are subliminated into the greater whole. Best thing is-the more you listen, the more self-revealing truths make themselves evident. "How can I not have heard that the first time around," thought I as the sixth or seventh play revealed new worlds of wonder. It's that good.

The Ken Schaphorst Big Band instructs How To Say Goodbye (JCA Recordings) on its fourth CD. Filled with longing odes like "Take Back The Country" for trombonist Bob Brookmeyer [1929-2011], an outspoken liberal who bought land in Canada upon Bush beating Gore in 2000, and "Blues For Herb," for trumpeter Herb Pomeroy [1930-2007]. Both men were key in Schaphorst's development as a trumpeter, composer, band leader and educator at the New England Conservatory. Students of all three men provide stirring solos, not the least of which is Donny McCaslin's tenor sax (a sax that graced David Bowie's Blackstar). "Amnesia" takes tango as its base while "Mbira #1" and "Mbira #2" takes its cue from the Southern African country of Zimbabwe. Trumpeter Ralph Alessi solos madly on closer "Descent." "Green City" is a swing and "Global Sweat" depicts a gathering storm, ending in a pouring rain of interplay like the finale of a fireworks display. Highly recommended.