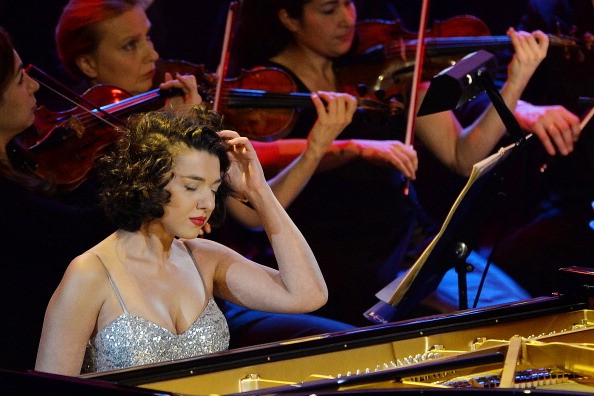 Everything about Khatia Buniatishvili perturbs some segment of the classical world in some way at some point. Is that a bad thing, though? Why must we sit in our most formal attire watching similiarly dressed people play similarly arranged music? Does that enhance Vaughn Williams' Concerto Grosso into the sublime? Does it make Antonín Dvořák's Cello Concerto in B minor, third movement's rondeau crisper? After all, the music must not hold that much sway if Khatia's cleavage has your attention more than Antonin. But don't just look at her boobs. The critic from the Daily Telegraph is not. He was told that Georgians were nice, sweet people and the banging Khatia was doing to poor Stravinsky's Petroucshka was tantamount to rape, to say nothing what it was doing to Lady Chatterly and the ideas it was putting in her head. Do you love classical music? If so, Khatia Buniatishvili will likely piss you off at some point.

It's difficult when an art form, which spurs your very soul to breathe, is as structured and unrelenting as classical music can be. After all, at the very heart of beauty is art and, without leeway, art becomes manufactured. But apparently, interpretation is only acceptable as long as it has a certified reason, case law to back it up, and a letter from James Levine. Khatia (Excuse the forwardness, but you try writing Buniatishvili more than once) is a virtouso and the way she plays and the notes she chooses are her voice to a lover, the wrongdoers of the world, and Ludwig and Wolfgang (who are busy in a dancehall taking in this new cat, Jerry Lee Lewis with amazement—they had never before seen anyone make the piano his b@tch).

Ivan Hewett didn't see it this way. He sat and listened, and had to ask from behind his computer at the Telegraph, "This was all very striking. But where was the musical sense in it all? When everything is pushed to extremes, all we're left with is a series of shocks to the nervous system, which very soon wear off. I never thought the beginning of Chopin's heroic and tragic Scherzo could sound trivial, but Buniatishvili somehow managed it. The piece began fast and then accelerated, skidding to a halt at the first cadence with cartoonish suddenness."

But yes, Khatia is bound to irritate the hardcore at some point. Her concept of music probably differs from that of Ivan Hewett. Is either wrong? Must you turn inward to enjoy Liszt, or to play Liszt? Was Franz a pious man?  Hardly. So why can't we go a little avant-garde on his ass? Andrew Clements is here to say he will protect Mr.Liszt's chastity at all times. He works for The Guardian, after all. Andrew had this to convey about the pianist called Khatia, "She is in her late 20s now, at a time in her life when most pianists are turning early promise into real achievement, but to judge by the rash, immature playing in her latest London appearance, Buniatishvili is still some way from doing that."

Art is not perfect. If you want perfect, go be a politician. That way, you can legislate the wrong out. True humanists are artists because they are society's biggest failures. To be alive is a series of failures and that's what makes certain people more interesting than others. They go out on ledges and stick their necks to create new. Even in assessing what she does, this failure is there. Intentionally so? Her explanation for her newest CD raised some eyebrows, as Khatia is apt to do. This, via Slippedisc, "Earth and woman are, for me, symbols of fertility and creativity. It's a primitive truth:  We all come from our mother. Feminine fertility is what makes my CD so personal. That is why I don't play the virtuoso here, as usual. It comes - trite, but true - from the heart. In these pieces, emotion transcends style, one doesn't know which which period they come from; in this mixture, style is no more. The album is bound up with my mother, the beginning of my life in her belly."

Khatia Buniatishvili is good-looking, dresses in form-fitting dresses and you can't help it, you sneak peeks at her boobs. That's alright. It is her search for art.

Christian Lillinger Looks Like a Rocker, But His 'Grund' is Anything But [REVIEW]

Laurie Anderson Holds a Concert for Dogs in Times Square